No Vote, but a Voice

Around this time four years ago, I was talking with a Chinese student. Then, as now, it was impossible to have a conversation without it circling back to the election and so I asked him what he thought of Donald Trump.

He shrugged. Yes, the president-to-be had said some cruel things about foreigners, and all the America First stuff made him feel uncomfortable. But Trump was a famous, successful businessman, and that earned him respect back in China. What’s more, none of Trump’s rhetoric had been directed at international students, or at Chinese students in particular.

“I am not American,” the student said of the Trump presidency, “so I don’t think that it will touch me.”

Fast forward to today, and I suspect few international students would take that position. Beginning in its first days with the travel ban, actions by the Trump administration have been enormously consequential for students from overseas. Policy changes have made it more difficult to get student visas and have increased scrutiny of those who hold them. Even as the clock ticked down to the election, the government proposed limiting the amount of time international students can stay in America.

These policy debates have motivated students like Yi Xuen Tay to become more active. When the Trump administration tried to enact a policy this summer that would have forced international students to enroll in face-to-face classes or leave the U.S., Tay, a graduate student at the University of Nebraska at Lincoln, persuaded her sorority sisters to sign a letter condemning the policy.

“Even if I don’t have the power to vote,” Tay, who is from Malaysia, told me, “I still have a voice.”

While visa policy affects international students directly, their political engagement is hardly limited to this issue alone. International students march for science, campaign for educational equity, and care deeply about being allies to their American classmates of color. Ankita Arora, a postdoctoral fellow at the University of Colorado’s Anschutz Medical Campus, has been alarmed by the Trump administration’s stance on climate change, which the president has called a hoax. Now, she is considering shifting her work to science policy.

“As a scientist, I want to raise my voice,” Ankita, who is Indian, said. (You can read about how Ankita, Tay, and other international students see the election in this recent Chronicle of Higher Education article.)

That’s not to say that international students haven’t always been involved in critical political and social debates. After all, vice presidential candidate Kamala Harris’ parents — doctoral students from India and Jamaica — were drawn together over their support for civil rights.

Still, many current international students have discovered their voices and are making sure they matter. And isn’t that, as several people have reminded me, one of the lessons students — Americans and international, in the classroom and out — are meant to take away from college?

Tell me what you think of this newsletter — or suggest ideas for future reporting. You can email me at latitudesnews@gmail.com or message me on Twitter or LinkedIn.

When it comes to international enrollments, how did we get here? That’s the question a new report from NAFSA, the Association of Public and Land-Grant Colleges, and INTO University Partnerships seeks to answer. The study, the result of a two-year collaboration, examines more than a decade’s worth of data, stopping prior to the pandemic, but I was particularly interested in its conclusions about recent years when enrollments began to soften. Some key observations:

A global profile matters in attracting students. Whether an institution was among U.S. News’ top 50 was the most statistically significant factor affecting enrollment growth. International enrollments increased 5.5 percent between 2015 and 2018 at top-ranked universities, even as they dipped at all other colleges.

But not far behind was the size of a colleges’ international population. Several years back I wrote about the phenomenon of the bigs getting bigger when it comes to internatonal students, and I was interested to seen it borne out in the new analysis. Colleges with more than 2,300 international students were 1.94 times more likely to experience growth than those with smaller populations. That raises certain equity questions, which haven’t been discussed much.

Third-party recruitment partnerships matter — maybe. Such partnerships were found to contribute to growth, but the researchers, several of whom are affiliated with a private provider, also noted that there are recent cases where outside relationships have seemingly had the reverse effect.

The blow of past enrollment declines have typically been cushioned by increases in students from other countries or region. The drop in students from Indonesia, Malaysia, South Korea, and Thailand during the Asian financial crisis in the late 1990s, for example, was made up for by increases from China and, to a lesser extent, India. If China, the dominant market for international students, contracts, what will make up for that loss?

I’ll be moderating a conversation this Thursday at 10:30 a.m. PT on antiracism in higher education with Darla Deardorff of the Association of International Education Administrators and Harvey Charles of the University at Albany. Please join us as we discuss questions including: How can international educators lead in crafting a vision for a post-racist world? How can they leverage the multiple tools that intercultural learning and cross-cultural communication provides to develop the next generation of anti-racist leaders? How can they work to normalize cross-cultural and intercultural diversity in the communities that they inhabit?

This webinar is sponsored by the University of California at Berkeley Center for Studies in Higher Education and the Berkeley International Group. Register here.

Harvard is pushing back against a lawsuit by former chemistry chairman Charles Lieber that argues that the university is contractually obligated to pay his legal defense against charges of hiding his China ties.

China is giving doses of an unproven coronavirus vaccine to students who are studying abroad.

A school counselor in South Korea has been arrested for allegedly leaking SAT questions.

A bombing at a Pakistani religious school has killed seven and wounded more than 80.

The president of Belarus has demanded the dismissal of students and professors who participate in pro-democracy protests.

Russian prosecutors have ordered a Moscow university to submit information about students who took part in protests and who had contacts with foreign groups.

University honors students have been detained for six months in Iran.

Irish universities may be subject to tougher accountability measures.

I’m writing this newsletter balancing my laptop on my knees as I drive back across the country. (Hello, State College, Pennsylvania! Hello, Lawrence, Kansas!) I’ve spent the last three months in Maine with my family, and the ability to pick up and work remotely near them has truly been one of the gifts of the pandemic. I treasure the things I would have missed from 3,000 miles away: My oldest nephew now reads so much he requires biweekly (socially distanced) trips to the library. The middle one learned to ride a bike this summer. The youngest can throw a baseball! He’s one!

Gratitude is a muscle I’m trying to exercise more during this time, even if it doesn’t always come naturally. In that spirit, for the second half of my trip next weekend, send me your suggestions for podcasts, audiobooks, or even good local radio stations to check out between Denver and San Francisco. I’d be grateful. 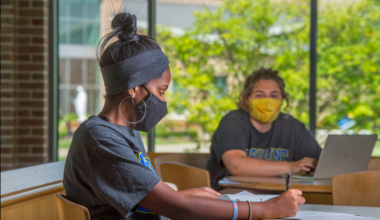 The United States has never had a coordinated national approach to international education. Now the Biden administration says it will pursue one.

A federal judge in Texas has ruled as illegal a program that has protected hundreds of thousands of undocumented immigrants brought to the United States as children.

In withdrawing a Trump-era visa-rule change, the Biden administration notes overwhelming opposition to the proposal.

The University of California will cap international enrollments to admit more in-state students. But is it necessarily true that if someone gets in, someone else has to be left out?

International students can can work in the dining hall or campus bookstore — but wouldn’t be permitted under visa rules to profit from their “name, image, and likeness” by appearing at a soccer clinic or autograph signing, as the new laws allow.

Students are pushing back against a Trump-era policy that denies visas to people who studied at universities affiliated with the Chinese military.
Back to top