Freshman Angelina Minisall lines up for her vaccine at Baldwin Wallace University’s clinic on Wednesday, April 7.

COVID-19 vaccines have long been on the radar of Northeast Ohio’s colleges and universities. Officials just didn’t know if, or when, the time would come to shell out the shots.

Take Oberlin College. Administrators there worked with a local hospital and pharmacy to apply to become a distribution center months ago.

“We planned this whole clinic not knowing fully that we would ever receive (the) vaccine,” said Katie Gravens, Oberlin College’s COVID-19 campus health coordinator.

Having the approval and logistics in place made it easier to roll out a four-day clinic at its gymnasium after Ohio Gov. Mike Dewine recently announced the state’s intention to vaccinate every college student who wants one at campus clinics before the summer begins.

After institutions nationwide saw enrollment drops last fall amid the pivot to remote or hybrid learning, vaccines could offer campus communities a return toward pre-pandemic life. Some already have hosted clinics in conjunction with health departments or other groups, but this new push is aimed just for students. DeWine called it a “strategic move.”

Gravens said about 95% of Oberlin’s students indicated in a recent survey that they wanted to be vaccinated. The college’s mass clinic will be using the one-shot Johnson & Johnson vaccine. Other institutions have received or will be receiving the same, too.

That’s ideal, said University of Akron director of health and safety Eric Green. It would be tough to use a different vaccine that required multiple shots as the semester winds down, even though he said many students are commuters who may not leave the area for breaks.

“When we vaccinate, it has a bigger impact on the local community because those students are staying here,” he said.

The university partnered with a local pharmacy and is set to distribute about 4,200 shots over two weeks of mass clinics at its basketball arena. Though “a lot” of students have already gotten vaccinated through their job or other means, Green said officials have been told the number of doses can be adjusted if demand exceeds the supply. The vaccines are free, though Green said the university will use some of its recent federal relief funding to help pay for any additional costs.

But UA and the other institutions Crain’s spoke with for this piece aren’t requiring the vaccine for the fall at this time. The sentiment is similar throughout the area, with a caveat from officials the situation continues to be monitored.

It’s not a requirement at the region’s four community colleges or Kent State University, the school with Northeast Ohio’s largest enrollment.

In Cleveland, Case Western Reserve University’s website pointed out while it’s not a university requirement, it may be for some of its partner institutions. Cleveland State University said the vaccine will be needed for students living in a residence hall this fall.

A handful of colleges nationwide are requiring the vaccine as of now. A recent recap by the Harvard Law Review said institutions may have the legal ability to implement a requirement, but pushed for more federal guidance on the topic.

Institutions are certainly strongly encouraging campus communities to get vaccinated, though. Scroll through social media and you may see part of a local institution’s campaign, many of which use some variation of a mascot wearing a post-vaccine bandage to raise awareness.

Baldwin Wallace University is asking the campus community to share their vaccination status if interested. The school will also have a record of students who received the shot on campus during the recent mass vaccination clinic at its recreation center. Assistant vice president and director of university relations Dan Karp said the university received the full quantity of vaccines it would need in one shipment.

Other local institutions are implementing similar processes. Keeping track can help identify if a campus community is reaching herd immunity status. Plus, it may give the ability to roll back some of the safety protocols colleges have implemented amid the pandemic, especially the ones put in place if a student comes in contact with someone exposed to the virus.

“By sharing with us that you’ve been vaccinated, that allows us to say ‘OK, you don’t have to quarantine right now,’ “ Karp said. “Or ‘all right, we don’t have to include you in the surveillance testing.’ “

And as the spring winds down, administrators are no doubt looking toward the fall. Many of the return to campus plans introduced by local institutions over the past few weeks were crafted thinking that faculty, students and staff would all be vaccinated by the time classes begin again.

BW’s Karp said the college already has had a few students enrolling next semester who have already reached out. They want to know if they can get the vaccine once they arrive.

He reminds them of Ohio’s rules. Anyone who is over 16 is eligible now, and BW is encouraging those incoming students to get vaccinated throughout the spring and summer. The college doesn’t know if it’ll have vaccines on hand in the fall.

For now, though, these clinics and the flurry of vaccinations offer moments of hope after an eventful year. 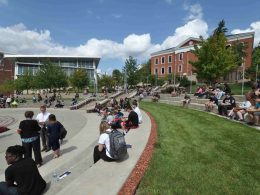