Serene and somber notes cascade across the Cowell College courtyard beneath a sunny afternoon sky at UC Santa Cruz. Seated on a bench with a sweeping view across Monterey Bay is Ross Piscitello, 22.

He’s playing his cello — a tune he came up with himself as a freshman sitting on this same bench four years ago. Next week, he graduates from UCSC with degrees in anthropology and politics before heading to law school in the fall.

But first, the senior has nine more stops to make.

“Every day until Thursday of my graduating week, I am going to a different college and playing for probably about an hour — just to give a sort of tour of the campus for myself, but also play music for others,” he said.

After Cowell, he planned to head to Stevenson on Thursday, Crown on Friday, then Merrill, Porter, Kresge, Oakes, Rachel Carson, then finally Colleges Nine and Ten.

Anyone up on their UCSC history might detect a pattern: That’s the order in which the colleges were founded, Piscitello’s tip of the hat to the campus he’s soon leaving behind.

After completing his tour de cello, he’ll be among the 2020 graduates participating in UCSC’s unusual commencement. Due to pandemic restrictions, the campus is spreading its hybrid virtual and in-person ceremonies over several days. Graduates can cross the stage and have their photo taken over a three-day period June 11–13, with up to two family and friends in attendance. Piscitello is crossing next Saturday.

A native of Torrance, Piscitello spent the fall of his senior year studying remotely back home. He moved back into campus housing in the winter.

“I’ve been on campus, but I haven’t really got to explore it as much as I want to nor as during a normal school year,” he said. “So that’s kind of what prompted this, in a way.”

He posted a loose appearance schedule on social media but isn’t counting on a crowd. It’s more of a personal, if public, endeavor. 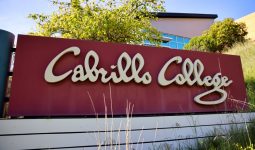