In March 2019, Michael Gutierrez was one of the nearly 60 students who stood outside the Union building on the University of Texas at El Paso campus to protest the appointment of then-UTEP president finalist Heather Wilson as she toured the university.

“When looking at this person’s voting record, I didn’t think they were a good fit for this community,” Gutierrez said of the former Republican congresswoman from New Mexico, who later served as secretary of the Air Force. “(We thought) ‘we can do better’ and other people felt that way too.”

But almost three years into Wilson’s tenure as president, Gutierrez has a different perspective.

“When I first looked at Dr. Wilson and the administration I would have said things are going to go downhill from here and things aren’t going to get better,” Gutierrez said. “But now going on year three, it’s the complete opposite. I never thought I would develop a personal relationship with someone I was so against.”

After being named the sole finalist for the UTEP presidency in 2019, Wilson was criticized for comments she made about marriage as a “union between one man and one woman” that should be honored “in law and in our communities.” She also drew backlash for votes she cast against more federal protections for the LGBTQ+ community.

But Gutierrez and other LGBTQ+ students also say that Wilson has been receptive to their concerns, though other advocates in the community still believe she was the wrong choice to lead UTEP.

“As the nation’s leading Hispanic-serving research university, The University of Texas at El Paso fully understands our role as an inclusive organization with access to all, regardless of race, ethnicity, national origin, sex, religion, age, disability, veteran status, sexual orientation or gender identity,” UTEP officials said in a statement after El Paso Matters requested comment from Wilson’s office.

“Our faculty and staff are committed to providing students an excellent education in a non-discriminatory environment that builds on student strengths and demonstrates a culture of care with a particular focus on underserved populations.”

An online petition with over 10,000 signatures called on the University of Texas System’s Board of Regents, which appointed Wilson, to withdraw her nomination. Several commenters said Wilson’s beliefs were not reflective of the community’s values.

“I told myself I would hold this person accountable because I felt like it was my duty as a LGBTQIA+ individual and advocate,” Gutierrez said about his freshman year promise to himself.

Now entering his senior year, Gutierrez, who was an active leader in the “UTEP deserves better” movement against Wilson, said the president has been nothing but welcoming and receptive to the LGBTQ+ community.

A new perspective on Wilson

Gutierrez isn’t the only one who says that they’ve changed their perspective about Wilson. The Queer Student Alliance, a prominent LGBTQ+ student group at UTEP that was active in protests against Wilson, feels the same.

“We’ve decided that we’re not going to bring up anything she’s done in the past as we’re only going to talk about the experiences we’ve had here at UTEP — which have been great,” alliance President Jake Orosco said.

Since becoming president, Orosco said Wilson has shown support for the student group and overall LGBTQ+ student community by actively showing up at events and keeping ongoing communication with the organization.

“She’s shown us nothing but grace and we weren’t sure if we were going to get that,” Orosco said.

During the 2019 Minerpalooza, an annual event where students, faculty and staff celebrate the upcoming school year through several activities, Orosco said that Wilson and her husband, Jay Hone, donned the organization’s pride stickers for the entire event and not just when meeting the organization.

Gutierrez said that he also has seen nothing but a positive commitment from Wilson about various LGBTQ+ initiatives.

“When it comes to the feeling of Dr. Wilson at the university I would say it’s becoming more welcoming and developing over time as she’s in office,” Gutierrez said.

Gutierrez and Orosco said Wilson has been receptive to listening to not only their concerns or feedback, but also those of the general student body. They said she has participated in LGBTQ+ events and has had an open line of communication.

But they also recognize that their points of view are influenced by their positions within their respective organizations that allow them to closely work with Wilson, something that the other members of the school community may not experience.

“I think that someone can view her in two ways. The first way (is) that she’s new, she’s the president of the institution, and she wants to do what’s best for everybody,” Gutierrez said. “Then there’s this other side where we know her, what her voting record is, we know what she said, so it’s scary to have this leadership at the university.”

As president of a student organization, Orosco said he recognizes that not everyone will agree with its stance on Wilson.

“For the whole community it’s rough but we get it. Not all of our members are fully on board and with each person it’s case by case,” Orosco said. “But we have to give her a chance because she’s not going away any time soon.”

From the outside looking in

Last month, UTEP hired Lucas Roebuck as vice president for marketing and communications. Roebuck, who came from the University of Texas at Tyler, formerly worked as a director of university communications at John Brown University, a conservative Christian school in Arkansas, from 2009 until 2015.

Roebuck is also a 1997 graduate of John Brown University and started at UTEP on June 14.

According to his resume, he was responsible for leading the “communications team, serving as both brand manager and university spokesperson” at John Brown University. In 2013, that included defending the university in its decision to fire a professor who came out as gay.

In a 2013 Huffpost article, Roebuck stated “that the university does not employ ‘practicing homosexuals,’ and that “the university does take the position, informed by our Christian faith, that sexual relations are only appropriate between a man and a women in the covenant of marriage.”

When asked about Roebuck’s previous work experience and how it translates to the UTEP community, university spokesman Victor Arreola said: “UTEP is committed to equal opportunity and does not tolerate discrimination, including but not limited to discrimination based on sexual orientation or gender identity. The statement you refer to was previously made by Mr. Roebuck in his official capacity as a spokesperson confirming policy at a private university. If he is asked by a reporter about UTEP policy, we would expect him to confirm our UTEP policy and to act in accordance with it.”

Brenda Risch of the Borderland Rainbow Center and a former UTEP professor, believes Roebuck’s hire illustrates the priorities of the university.

“Actions speak louder than any media words (Wilson has) said of being committed to the LGBTQ+ community,” Risch said.

“I think we need to do a better job at hiring people who are representative of the student body at UTEP,” said Adri Perez, the policy and advocacy strategist for LGBTQIA equality at the American Civil Liberties Union of Texas. “Both demographically and in their values. There is great talent here.”

As a 2016 UTEP graduate, Perez said they feel that the hiring practices don’t take into account the local talent. Perez uses they/them pronouns.

Risch, who agrees with Perez that Roebuck’s hire is not reflective of the UTEP or El Paso community, believes the same of Wilson.

“I was horrified of her as a choice,” Risch said. “She is, she was, and remains massively inappropriate for this post.”

Risch explained that she believes Wilson does not understand the values of a border community.

“I don’t think that there is anything Heather Wilson can do to be true to this community unless she has a personal conversion of her values,” she said. “She is a conservative and that is not representative of El Paso.”

While student groups like the Queer Student Alliance are developing positive relations with Wilson, Risch said this is not visible from the outside.

“I can only comment as a community member, and I don’t see anything positive that is happening,” Risch said.

Antonio Aguero, a senior studying computer information systems, said that while the LGBTQ+ community is accepted on campus, he still has some reservations about Wilson.

“I don’t really admire her,” Aguero said. “I feel that it’s a step backwards in making the country more progressive.”

He also said that he hasn’t physically seen Wilson involved in any LGBTQ+ efforts.

Risch said it’s important to understand the distinction of the university and how that can be separate from what the president represents.

“There’s committed faculty for the LGBTQ+ community but it’s up to the administration,” she said. “It’s all about image.”

Perez said they wish that the president’s appointment would have gone to someone more representative of the community.

“I think I got really disheartened and her appointment led me to being more separated from my alma mater than I would have been in any other circumstance,” they said.

But for senior student Gutierrez, he said he believes that Wilson has had a genuine change of heart, at least he hopes.

Currently, Gutierrez and the Queer Student Alliance are working with the university on getting the Miners’ pick in rainbow colors, which would show the university’s public alliance with the LGBTQ+ community. But while that won’t be visible this Pride Month, they hope it will be settled later this year.

“I would like to believe she has had a change of heart because I genuinely like to view humans in a good light because I believe there is good in everyone,” Gutierrez said. “And I know Wilson’s background says otherwise but I think the thing with accountability is understanding the position of the past and acknowledging that they can move forward and develop into a better person than what they were before.” 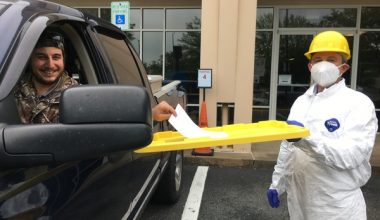 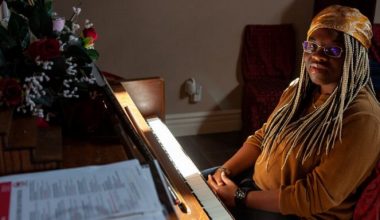 Abeni Merriweather’s piece is an arrangement of Black spirituals that date back to the time of legal slavery in America. She said she was inspired to use spirituals after hearing them in a video game. 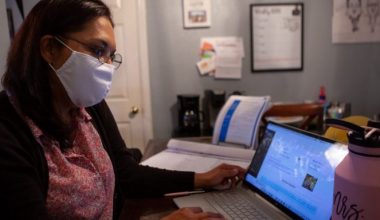 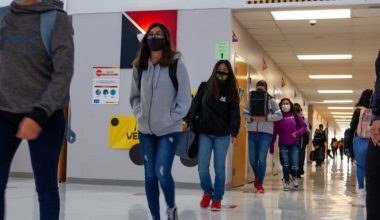 Conservative lawmakers wasted no time answering Gov. Greg Abbott’s call to enact further restrictions on how race is taught in relation to the nation’s history in public and charter school classrooms. 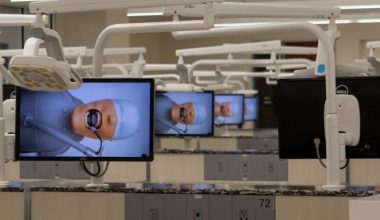 More than half of the state’s dentists practice in the five most populous counties. “So the rest of Texas is underserved,”the school's dean says. 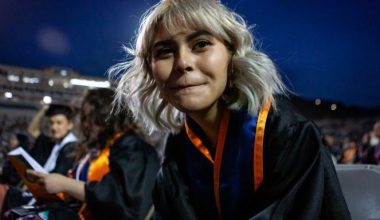 “My parents never told me I had to go to school or do this and that," said Victoria Almaguer, "but I put it onto myself because I know what they have sacrificed." 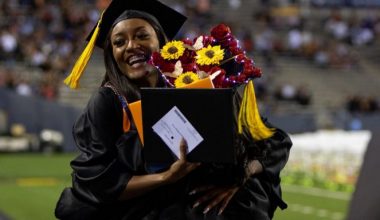 Graduates included parents, first-generation students, and students who enlisted the help of the university and federal agencies to ensure their families were able to witness their accomplishments.
Back to top