‘We are the future’: Students react to proposal that would slash thousands in financial aid

It was late at night in December 2018 when Andy Flores discovered an opportunity that would change his life.

The senior at Ocean Springs High School was searching the internet for college scholarships when he came across a result for an aid program on the website for Mississippi’s Office of Student Financial Aid. The description said the program paid for all four years of college.

Flores was intrigued. The son of Panamanian and Mexican immigrants, he was the first in his family to apply for college, much less attend. Flores knew he was smart, but whether his family could afford to pay for college was another matter entirely.

Huddled over his laptop, Flores read through the qualifications for the Higher Education Legislative Plan for Needy Students (HELP) grant: A 20 or higher on the ACT? Check — Flores had scored a 33. A GPA better than 2.5? Check. Coming from a household making less than $39,500? Check.

Three years later, Flores is thriving as a double-major in public policy and philosophy in the honors college at the University of Mississippi. The 20-year-old is the co-founder of the First-Generation Student Network, and, when he graduates, he plans to continue advocating for marginalized students in Mississippi.

“The HELP grant quite literally changed my life and saved my chance at higher education,” Flores told Mississippi Today.

After years of budget woes, the Post-Secondary Board, which oversees student financial aid in Mississippi, proposed last week a drastic overhaul of the state’s programs. In an unanimous vote, the board recommended replacing the state’s three existing programs with the “Mississippi One Grant,” which would award financial aid using a formula of need plus merit. “Need” would be determined by a student’s Free Application for Federal Student Aid (FAFSA), and “merit” would be based on composite ACT scores.

Jim Turcotte, the chair of the Post-Secondary Board, said the redesign is intended to give financial aid to more students. But with a finite pot of funds, granting aid to more students will necessitate decreasing the average amount of each award — especially for the poorest students.

If the Legislature adopts the program this session, low-income students will lose thousands of dollars in financial aid. Flores, as a current HELP recipient, would not see his award go down: The proposed program has a legacy period. But the difference between Flores current award under HELP grant and what he would get from the Mississippi One Grant is illustrative of what prospective students will face under the proposed program.

Over the course of his four years at UM, Flores is slated to receive more than $35,000 in financial aid from the HELP. That’s a yearly award of approximately $8,700, the annual tuition at UM. With the Mississippi One grant, Flores would get the maximum four-year award — of just $18,000.

Yet low-income students weren’t included in the Post-Secondary Board’s discussions of the proposal. The board convened a panel of eight financial aid directors to rewrite the programs, but they did not bring students, their parents or families into the policy-making process.

Now, these students are speaking out. Flores has started a campaign called “Help save HELP” to compile testimonials in an effort to make sure legislators know how much the program means to students and their families. A change.org petition that Flores created already has over 1,000 signatures.

“We want to talk about a college education as a great equalizer, but then we get this on our plate, when the HELP grant has been shown to be effective time and time again,” Flores said. “It’s a big, jumbled mess.”

Noah Watts was near tears when he got his financial aid award the summer after his senior year at East Union High School. Watts always knew he wanted to go to college, but with a single mother who works as a receptionist in a doctor’s office, he didn’t know how his family would afford it. But thanks to more than $8,500 in annual financial aid from the HELP grant, he’s now a sophomore at University of Mississippi considering studying pre-health.

Under the Mississippi One Grant, Watts would struggle to afford UM. With an ACT of 33 and an expected family contribution of zero, Watts would receive the highest annual aid award of $4,500 under the proposed program, leaving him to make up the more than $4,000 difference through scholarships or the Pell Grant.

“I was just worried, instantly,” Watts said of when he learned about the proposed changes. “It was like a very, very bad feeling in my stomach. I was thinking, ‘What if that was me? What if this was two years earlier, and I had that money taken away from me?’”

Without the HELP grant, students who talked with Mississippi Today say that in order to attend college, they might’ve had to take jobs or student loans, making it harder to focus on their studies or get involved in clubs. For many students, their life would be radically different without the HELP grant.

“I would probably be homeless — I probably wouldn’t be talking to you right now,” said Tabrelle Deering, a senior accounting major at Mississippi State University. “The HELP grant enabled me to live off campus and pay all my bills for each entire semester and have a little bit of money left over in case of emergency.”

Deering is the second person in her family to graduate high school. Her mother died when she was 15, so when it came time to apply for college, she had to do it on her own while taking care of her four siblings.

“I did my FAFSA completely on my own,” she said. “It was a bit difficult, but Google was a big help. … It was just kinda like, if I was gonna do it, I knew I had to do it by myself.”

She didn’t know if college was going to be possible until she got the HELP grant. And now, like many HELP recipients, Deering wants to give back to the state that has helped her by becoming a teacher.

Other students say the HELP grant has fostered a sense of social responsibility.

“Programs like the HELP grant are Mississippi’s smartest investment,” said Justin Childs, a junior at Mississippi State University. “For Mississippi to have the most competitive and educated workforce, it needs to address those who are most harmed by systemic oppression and poverty.”

Childs receives around $9,100 a year from the HELP grant. “It was my ticket” to college, he said.

But under the Mississippi One Grant, Childs would see his financial aid award drop to $3,300 a year. Childs would receive $2,500 for his “need,” the maximum award, so the decrease is mainly due to his ACT score, which is a 21.

The minimum ACT score to receive aid from the Mississippi One Grant is an 18, but students won’t receive any additional “merit” aid unless they score higher than a 20. In Mississippi, the average ACT score is 17.7.

Not only do Mississippi’s public schools do a poor job of preparing students to take the ACT, Childs pointed out that the test is not the best indicator of academic potential.

Child’s ACT score aside, he has flourished at Mississippi State. He is now double majoring in political science and psychology and volunteers as a mentor to first-generation college students.

With the HELP grant, Childs said he can “focus on my studies and what I want to do with my time here at Mississippi State, how I want to leave a mark here and just help the students I mentor.”

The current debate over Mississippi’s financial aid programs gets at an important point: What exactly should the state’s goal be? Is it to award students for good grades in high school, or encourage them to pursue certain fields in the workforce? Should the state help low-income students afford college, or award aid to as many people as possible?

Although they all voted in favor, the nine members of the Post-Secondary Board seemed split during the meeting as to how to answer those questions.

And the Mississippi One Grant will impact students in ways the board did not intend. The proposal meets the board’s goal of giving aid to more students and staying in budget. But it does so by cutting aid substantially for the poorest students. And that means, on average, Black and low-income students will be getting much less.

This shift in resources was “not an intended outcome” of the new program, Turcotte told Mississippi Today. The committee didn’t “deliberately say, ‘let’s take money from this group and give it to that group,” he said. “We didn’t want to have a disparate impact on low-income students, white or Black.”

For their part, students who currently receive the HELP grant say that Mississippi should use its money to help students who need it.

“If the state wants to ensure a brighter future for the students, its teachers, its communities, that starts with investing in people’s future and codifying parts of law that affirm their worth,” Flores said. “I genuinely believe that people tend to flourish when you recognize that they’re not defined by what kind of financial position they’re born into.”

As legislators consider the board’s proposal, Childs said he’d like to see them ask students and families what goals they think Mississippi’s financial aid program should achieve.

“It’s weird to me how a lot of these programs for poor Mississippians are never open-door or town hall or even, what’s the word, referendum,” Childs said.

Low-income students want to know that their contributions to the state matter.

“This is something that helps the future generations,” Deering said. “Taking (HELP) away could possibly hinder a lot of students. … I feel like we should help every child in Mississippi, because we are the future. Why not help your future?”

‘We need it’: How one custodian is fighting fear to get a pay raise at U. of Southern Mississippi

Janice Jones makes about $10 an hour, the lowest wage on campus.

What does ‘contumacious’ mean? The history behind new tenure policies in Mississippi

The term is now a criteria university presidents can use to judge conduct in deciding whether to award tenure.

The revisions, the groups say, are “untenable” and “raise significant concerns under the First Amendment.” 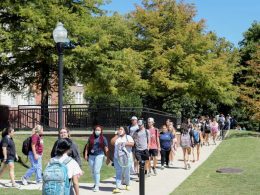 "Designing programs that allow students who cannot afford college on their own is the most promising strategy for ensuring a high return on the state’s investment.”