Here’s an understatement: Going to college, for some people, can be expensive.

Costs rose a reported 169% between 1980 and 2019, and student loan debt was estimated to clock in at $1.73 trillion in the United States earlier this year.

Couple that with financial challenges the pandemic may have amplified or ushered in, especially for women and people of color. Completion rates for the federal form commonly known as the FAFSA, which gives those who complete it a chance to get federal or state aid to pay for college, fell during the pandemic.

Higher education institutions took a hit, too. Colleges nationwide saw a 4.5% decline in total full-time undergraduate enrollment in fall 2020 and an additional 3.5% drop a year later.

The most recent is Ohio State University’s “Scarlet and Gray Advantage” program. OSU president Kristina Johnson detailed the initiative during her investiture speech in mid-November. Within the next decade, the state’s flagship university plans to offer a debt-free degree through a combination of grants, scholarships and work opportunities. The goal is for students to avoid taking out loans.

“This isn’t free college, or free tuition, or debt forgiveness,” Johnson said in an interview with Crain’s Cleveland Business. “It’s really a way of putting together multiple opportunities for our students to have the biggest choice when they graduate for what they do next.”

OSU plans to raise $800 million, with $500 million endowed, for scholarships over the next 10 years. Donors contributing to that endowment had a question for Johnson.

“Almost every single donor has asked us, ‘Do kids and families have skin in the game?’” Johnson said.

The answer? Yes. Students are expected to be active participants by contributing to their own education through working. The university wants to expand its network of paid gigs available on- and off-campus.

Johnson said there’s a dual approach to this type of partnership. The first, she said, centers on the lesson of “you value something you pay for,” something she learned while working during her own undergraduate days.

“The second is that these aren’t just ways for the student to contribute to their own college education; it’s a way for them to get career-enhancing experience,” she said.

Those participating will also have to meet additional requirements, including enrolling in some additional education. That will focus on topics like financial literacy, though some have pushed back on the effectiveness of that type of training.

OSU is set to pilot the Scarlet and Gray Advantage for 125 low- and middle-income first-year students in fall 2022 as it works to scale the offering over time.

The program made headlines locally and nationally when it was announced in November. Yet Kristina Dooley, a certified educational planner and founder of Estrela Consulting in Hudson, said the buzz around these types of announcements can sometimes fade quickly.

“I feel like families are learning about those things oftentimes after they’ve already looked at the school,” she said. “It’s not drawing them to consider the school at the onset, but it’s certainly something that could move that school to the top of their list.”

Affordability is the deciding factor for students and families, according to Jowan Smith, founder of Getting Our Babies to College 101.

“There’s no more of ‘just pick the school you love,’” she said. “Everybody is looking at how it impacts the household.”

At a workshop Smith delivered at a Cleveland-area high school last week, only one of the 18 students she talked with plans on enrolling in college next fall.

Enrolling at a traditional four-year college isn’t an experience for everyone, and right now, the pull of directly joining the labor force is strong. A local college president recently told Smith it’s hard to compete against jobs like working in an Amazon warehouse with pay of up to $17.50 per hour.

Median lifetime earnings are estimated to be about $900,000 higher for men with bachelor’s degrees and $630,000 for women, compared with high school graduates.

With that in mind, Smith tries to help young people see the big picture. She wants them to have a goal, and often encourages creating a five-year plan that includes some type of post-secondary education.

For those who do want to pursue a four-year degree, she’s noticed more interest in the University of Akron this year. UA introduced the Zips Affordability Scholarship in April. It covers tuition and the university’s general fee for Pell Grant-eligible traditional freshmen who live in one of six nearby counties.

Kent State University launched its own “Flashes Go Further” scholarship program in June. Officials said the goal is to expand access and get more students to graduate.

Students from Ohio who have a calculated expected family contribution of $10,000 or less are eligible, though there are some additional requirements. It’s meant to help cover unmet financial needs.

The average annual award was about $5,000, according to Sean Broghammer, KSU’s interim vice president for enrollment management.

“Flashes Go Further” differs from others as it also includes those who still fall below that family contribution threshold but don’t find themselves eligible for Pell Grants. Broghammer said lower-middle-class students have become more challenged to pursue a degree as higher education costs have increased.

Though the focus remains on increasing access, he admitted there is a mutual gain to be had.

“I think by creating these types of programs, you’re going to raise awareness and maybe even attract additional attention, so you would hope that enrollment would follow to some extent,” he said.

Kent State doesn’t expect to see huge increases in enrollment, Broghammer said, but officials do anticipate seeing “some” growth for this demographic in this population. 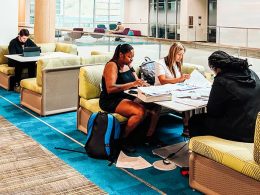