When Chasidey Willis graduated from Mumford High School in 2017, she developed a plan to graduate from college in a timely fashion.

She enrolled at Wayne County Community College District and completed 16 to 18 credits each semester as a student-athlete while working part-time in a work study program. Sleep was a rarity.

However, the then-teenager finished her associate’s degree within two years. She transferred to a four-year school, earned her bachelor’s degree in psychology, and is now completing her master’s degree in special education.

“It was definitely not the norm,” Willis said.

Academics and researchers have touted that educational attainment is the key to economic success, given that those with bachelor’s degrees tend to earn more annually than those with only a high school diploma. Just 15% of Detroit residents have a bachelor’s degree or higher, and economists have reported that, while salaries in the city are expected to increase, Detroit residents will earn an average of $42,300 less than their more-educated suburban counterparts over the next five years.

However, Detroiters say graduation rates are an arbitrary measuring stick, given the personal circumstances of Wayne County Community College District (WC3) students and their varied personal and professional goals. Not every student seeks a degree, and about 81% of those who do graduate from WC3 are employed after graduation. Nearly half the graduates see an increase in their income, according to college reports. In Detroit, the nation’s Blackest city, community college supporters say two-year programs are a valuable method to increasing economic well-being, but costly social systems can prolong their educational journey.

“We still have not defined completion,” said Dr. Curtis Ivery, chancellor of WC3. “Someone went to a community college and took one course in math or some sort, and after one semester, are they not a ‘completer’? What were their goals?”

Increasing completion across certificate and degree programs was part of the institution’s five-year strategic plan from 2015 to 2020. Other goals included technology and operational enhancements, professional development for staff, advancing local partnerships, and an increase in WC3’s community engagement efforts. WC3’s  six campuses have updated, modern designs, and nearly half of its students are enrolled through a mixture of online and in-person classes. WC3 administration say they have been “highly visible,” which may have influenced metro Detroit voters in 2018 when they supported a new combined millage rate of 2.25 mills.

The voter-approved financial support could be recognition that WC3 is more than an educational institution. The college offers support services to students that indirectly affect class attendance. Some of the free services include a food pantry for groceries, vouchers for city transportation, a closet of donated clothing, emergency housing placement, and mental health advisers for students who have struggled during the coronavirus pandemic.

Willis said the support she received at WC3 was “totally different” than her four-year college of University of Massachusetts Lowell, a Division One school. Willis said she graduated on time because she was dedicated to her studies and had constant support from her teammates, coaches, advisers and WC3 staff. They challenged her to maintain a minimum 3.0 grade-point average, and insisted that she attend study hall sessions.

“I honestly believe Wayne County was by far one of the best schools that I’ve been to,” Willis said. “I would say that I probably had a better experience at Wayne County” than her time at the four-year university.

Ivery said the institution has a student-first approach.

The chancellor says faculty and staff frequently speak to students about their educational journeys and social-emotional capacity.

Maya Williams began taking classes at WC3 in September 2019. The 20-year old grew up in Detroit and is a graduate of Chandler Park Academy High School in Harper Woods.

Williams, an honor student, said quarantine made school more difficult. Studying at home was not engaging, and logging on to a computer everyday was not the best way for her to learn.

She was excited to be enrolled in psychology and art courses for the 2020 school year and spent $200 on supplies. However, she wasn’t able to use the supplies for the classes during the pandemic.

“It’s crazy, I was really upset about it,” Williams said.

But she maintained a relationship with her adviser and is now enrolled and using the supplies in hybrid in-person and from-home classes this semester.

Myles Dalton, 21, transferred from a community college in the suburbs to WC3 in order to play basketball for the school. He dreams of attending a four-year college and becoming a veterinarian.

During the coronavirus pandemic, Dalton said he struggled to maintain his grades. He said his professors immediately reached out to him to make sure he was keeping up in class — a gesture Dalton said he never experienced at other schools.

Ivery expressed great worry for WC3 students during the coronavirus pandemic. He said students reported greater levels of stress and concerns for their mental health than he had seen before.

Joshua Warren, 20, also transferred from a suburban community college to WC3. Warren said he and other students met with Ivery in November, when they were asked to share their experiences as students. He said the conversation bounced around issues regarding race, equality, adjusting to the pandemic and “making it in life.”

“They really listen to what students have to say,” Warren said.

According to Ivery, some Detroit students face barriers to success unlike community college students in more rural parts of the state. Some students face a lack of reliable transportation, access to affordable and quality child care, stable housing and food. School administration also said that students have reported an increase in mental and emotional stress during the coronavirus pandemic.

“We still are a misunderstood construct, because people don’t understand the students that we serve,” Ivery said.

Courtney Brown, 31, enrolled at WC3 to give herself a “chance of a different career path.” Brown previously worked in retail and decided it wasn’t what she wanted to do. Her passion for murder-mystery games encouraged her to think about earning her associate’s degree in applied sciences to become a detective.

The Detroit Central High School graduate hasn’t had issues with finding child care for her children, ages 4 and 1, but she admitted getting to school on time is difficult given the lack of reliable public transportation. However, she remains undeterred going into her second semester, and hopes to graduate by fall 2024.

“I am not going to let it stop me or deter me,” she said. “I’m going to get my associate’s degree.”

Brown said her WC3 professors and classmates have been extremely supportive, and she feels like she can ask for help when needed. She’s impressed with the school facilities, like the computer lab where she can complete her work — a benefit not afforded her at high school. She’s also attended a career fair on campus to see how employers interact with students.

As community colleges like WC3 continue to support Detroiters’ educational and professional goals, the expectation to hire Detroiters, whether they have a degree or just a few classes, will be placed on the City and its relationship with incoming employers, along with other policymakers and organizations.

Community college should be an economical and practical avenue for Detroiters to gain professional skills for the area’s incoming technology jobs. Recent state reports highlight new job opportunities coming to the state as the unemployment rate continues to decline.

However, questions remain about whether Black and Brown Detroiters will be afforded new job opportunities in the city.

“We’d be remiss to not acknowledge the fact of race and (how it) affects opportunities,” said Portia Roberson, chief executive officer of Focus: HOPE. “It has everything to do with your access to jobs at a later stage.”

Roberson runs the Detroit nonprofit, which works against racism, poverty and injustice. The organization has developed workforce-training programs that provide stipends to Detroiters who are learning new skills to further their job potential. By paying residents while they learn, students are more likely able to maintain their home life and increase the opportunity of completing an educational or workforce program.

In addition to obstacles that some WC3 students face, such as inadequate transportation or inconsistent child care, Black and Brown students in Detroit historically have not had the same access to educational opportunities as white students in the suburbs, Roberson said. This includes paid internships, college preparatory programs, apprenticeships and college planning, which can increase their preparedness for professional opportunities and networking capabilities after graduation.

Gov. Gretchen Whitmer also has acknowledged the barriers to education. The State suspects 75% of jobs across Michigan will require some form of higher education in the future, and that residents can expect to earn $7,500 more per year with at least a two-year degree.

To get more Michiganders enrolled in school, the governor announced the Michigan Reconnect Program during the coronavirus pandemic. Tuition costs for adult learners age 25 and older are paid through the program. The governor’s goal is for 60% of Michiganders to have at least a two-year degree by 2030 to close the state’s skills gap and make Michigan a more competitive state for economic growth.

Applications for the Reconnect Program became available in February, and more than 87,000 Michiganders have already applied. There are 21,926 applicants from Wayne County and, of those, 57% identify as women and 57% identify as Black.

Preliminary employment data for Reconnect Program students is not yet available, according to the State Department of Labor and Economic Opportunity.

While Roberson says opportunities have not always been afforded to Black and Brown residents, she said new opportunities are heading to Detroit. The CEO says the Great Resignation during the coronavirus pandemic has forced America into an “employee market” and that jobseekers, even those without a four-year degree, have an advantage.

“I don’t think it’s as big a hindrance as it may have been in the past,” Roberson said. “We, for a long time, preached that the four-year degree was the only way you could get a good-paying job, and I don’t know that that was necessarily ever true, but it certainly has changed over the last two years.”

Now that Willis has completed two degrees, she has a bevy of job opportunities. However, the college graduate said the best opportunities weren’t in Detroit. After considering job offers, Willis recently decided to move to Texas, where she said she was offered a higher wage in an area with more opportunities for professional advancement long term.

This piece is part of a collaboration that includes the Institute for Nonprofit News, Borderless Magazine, BridgeDetroit, Sahan Journal and Wisconsin Watch. The project was made possible with support from INN’s Amplify News Project, whose funders include the Joyce Foundation in the Great Lakes region, and the Robert R. McCormick Foundation in Chicago. 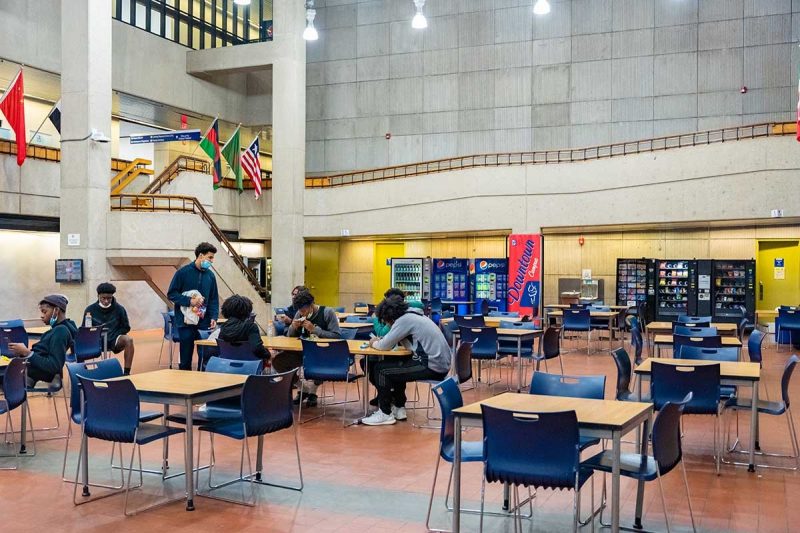 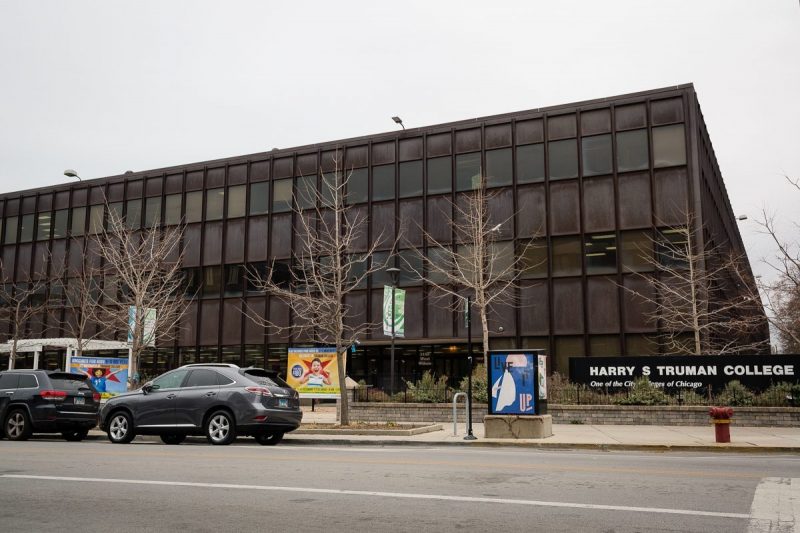 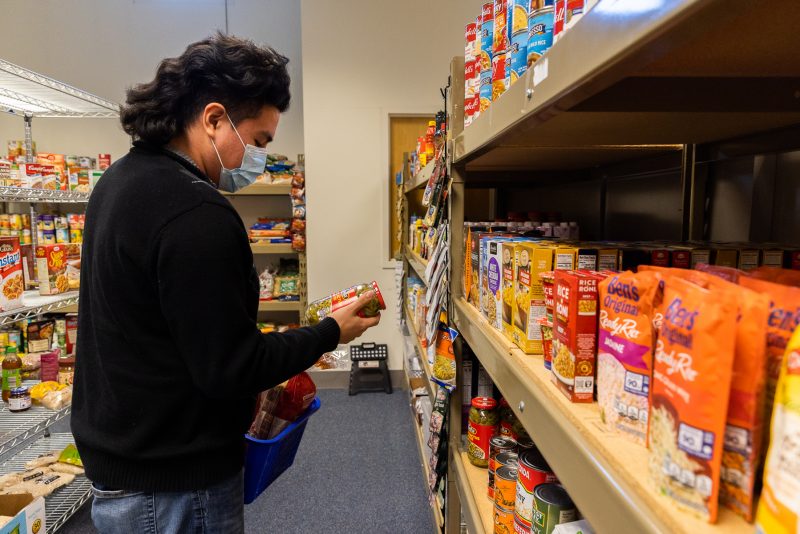 Hunger on campus isn’t a joke about ramen