Leaders in Ohio want 65% of the state’s workforce to have some type of post-secondary certificate or degree by 2025.

That’s an ambitious goal, especially given that enrollment dropped at the majority of higher education institutions amid the pandemic. The number of high school graduates in the state continues to fall, too, shrinking that pool of potential students.

Yet about 1.5 million Ohioans fall into the “some college, no degree” category, and an estimated 60,000 people in Northeast Ohio are believed to have what’s known as stranded credits.

Different from student loan debt, credits are “stranded” after a university withholds releasing proof of the credits students have earned when institutional debts like fees or tuition go unpaid.

A 2020 Policy Matters Ohio report found that students of color, as well as older and/or first-generation students, often have higher rates of stranded credits. Those at two-year schools are more affected than their four-year counterparts.

A new pilot program is launching to reach out to those with stranded credits, and, hopefully, re-enroll them. Four-year public universities in Northeast Ohio — Cleveland State, Kent State, the University of Akron and Youngstown State — are participating, along with the region’s two-year institutions: Cuyahoga Community College, Lakeland Community College, Lorain County Community College and Stark State College.

Leaders are optimistic the partnership could result in a host of interconnected benefits, including boosted enrollments, a more educated workforce and an added kick to the region’s economy.

“No one has come to the state of Ohio, to my knowledge, and said, ‘I need a less-educated workforce, I need a less-skilled workforce,’” said David Jewell, senior vice president of business affairs and CFO at Cleveland State. “The need is always more of that.”

The new, unnamed pilot is funded by foundations. In addition to the colleges, nonprofit research and consulting group Ithaka S+R and community organizations like College Now of Greater Cleveland are also taking part in creating and piloting what’s been dubbed as a “sustainable, inter-institutional compact.”

There are a few reasons why Ithaka is establishing this initiative here, according to Martin Kurzweil, the director of its educational transformation program.

Some local community organizations and advocacy groups are already doing related work. A few institutions already had debt-forgiveness programs of their own. That aforementioned demographic cliff lingers, and it’s coupled with employers who need skilled workers. Don’t forget those 60,000 students here with stranded credits, too.

“There’s motivation. There’s action. The policy framework is there in Ohio,” said Kurzweil.

Institutions can in fact do just that, and the report highlighted places that have already tried similar programs, including Cleveland State’s pilot program from 2019. The school forgave balances of up to $5,000 in exchange for students meeting a host of other requirements as they re-enrolled, including paying that full semester’s tuition and agreeing to meet with a counselor.

In this new compact, participants will work together to find and reach out to eligible students, offering support and guidance. Each of the participating colleges also agreed to work with students to settle those institutional debts and release transcripts, whether they chose to enroll at the institution they started at or another one of the compact’s institutions.

That’s big. Research shows most adult students who stop and later begin again do it at a school in the same area but different from where they started.

Under the compact’s plan, even if that happens, it’s still a financial bonus for the home institution. Participating institutions will engage in “periodic financial transactions to account for resolved debts for students who enroll somewhere other than their previous institution,” offering more than the 7 cents on the dollar typically seen once a student’s account heads to collections, according to Ithaka. Colleges that re-enroll students where they began will see those tuition dollars stay.

But, of course, colleges want more students. Each institution involved saw a decline in full-time enrollment this fall. Yet leaders are pledging that this partnership puts community over competition, underscoring that getting more students back to school is the most important thing.

“Should we miss out on a couple of people because they choose to go elsewhere, it’s still a win for our community,” said Laura Barnard, Lakeland’s executive vice president and provost.

It would be a win for the colleges, too. According to Ithaka, even if just 10% — or 6,000 — of those with stranded credits begin again, they’ll account for a collective $41 million in annual tuition revenue. And if students’ institutional debts are settled for even a dime on the dollar, per Ithaka’s calculations, it’ll amount to about $900,000 to the colleges in payments, compared with just $630,000 they’d probably get in collections.

The pilot’s goal is to enroll students as early as the fall 2022 semester. 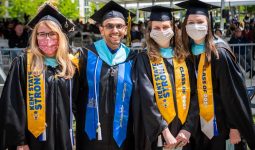 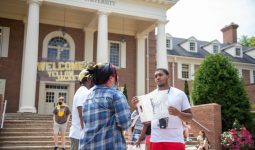 An analysis of the 26 higher-education institutions in the Crain’s colleges and universities full digital list saw about a 3.8% decrease in combined undergraduate and graduate full-time equivalent enrollment since the same period in 2020.