A rural town with two HBCUs and no movie theater

These are common hallmarks of poverty in rural America. There is no inherent shame in them.

However, things don’t have to be this way.

South Carolina State has an elementary school on campus that serves the community, and a lot of education majors serve as teachers to them. The students at both HBCUs emphasize volunteering, with everything from the boys and girls club to charity walks.

“Orangeburg is a very rural community, and the institutions provide a lot of jobs,” says Denise Smith, a higher education senior fellow at the progressive think tank Century Foundation.

Yet despite those opportunities, the city has long let the area around its universities have the curb appeal of a busted lip.

The problems of that malaise became clearer recently when students were asked to chime in on a city proposal to finally redevelop Railroad Corner, a currently dilapidated junction within walking distances of both HBCU campuses.

Students describe a city with little options off campus. “We don’t even have a movie theater or anything,” one senior told The Times and Democrat — another student listed “Cook-Out” as their main off-campus hangout. That was true for Smith as well, when she was a student at South Carolina State from 2004 to 2008.

Students looking for entertainment must drive about an hour either north to Columbia or east to Charleston. Which might leave cash-strapped students having to book pricey hotels … or potentially risk a DUI after a night out.

With the Railroad Corner redevelopment, Orangeburg hopes to enhance walkability and build mixed-use developments that attract students from the universities, serving as “a gateway to downtown.”

It’s a promising sign for town-gown relations that the city’s first public input session was held in the Claflin University Dining Hall. “The city is starting to see the contributions the institutions are making,” Smith said.

But the fact that conditions near the city’s two HBCUs have been allowed to linger for so long warrants further questions about relationships between majority-Black institutions and the rural towns many of them occupy.

That’s especially true here, at the site of the 1968 Orangeburg massacre, where South Carolina Highway Patrol officers shot and killed three people while firing into a crowd of protestors on the South Carolina State campus — an incident that began with a small group of Black students trying to bowl at a local alley.

Orangeburg is majority Black — both in its population and political leadership — although rural communities trend older, whiter and poorer than many other college locales.

In some cases, university-inspired economic development that other cities would embrace is seen with a wary eye, particularly in retiree-heavy regions where “change” is sometimes a cuss word.

In its city, Swainsboro, there are few hangouts catering to EGSU students, from coffee houses to restaurants.

Internet investment in the area is poor, so much so that people living even 100 yards outside of city limits are subject to near dial-up speeds.

There has been no meaningful effort to build off-campus housing of any sorts, much less affordable student housing.

The problem? Students of color in these under-serviced regions must also rely on them even more than their urban peers.

Only 65% of Americans in rural areas have access to high-speed internet, compared to 97% in urban ones.

More than 1 million households in rural America, where driving distances to services are often significantly longer, don’t have access to a vehicle.

Those seeking to use public transportation instead are often out of luck: Only 57% of community colleges have transit stops within walking distance of campus.

Sure, rural communities often have fewer resources to support students with. But plenty of rural communities across America are revitalizing themselves despite facing similar challenges — places like Gillette, Wyoming and Trinidad, Colorado, which have made public arts projects into economic drivers.

The Railroad Corner project creates that same type of opportunity for Orangeburg — to see if it can create a better environment for the very students that are the reason that presidential motorcade even came to town.

“Seeing Orangeburg want to, slowly, but surely, invest in making this into a college town is exciting,” Smith said. 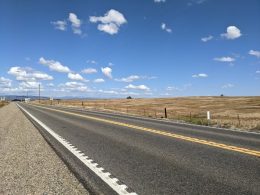 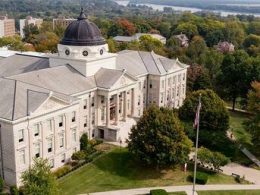 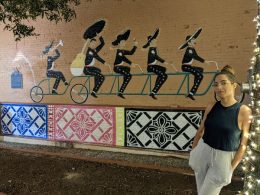 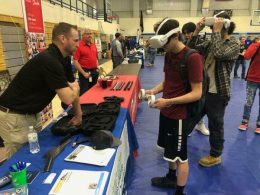