byEmma Folts
Pitt Police should prioritize the knowledge of the HEART clinicians when responding to a crisis and learn from them, said Eva Steele, a third-year student. (Photo by Lucas Zheng/PublicSource)

For college students in the midst of a mental health crisis, interacting with campus police can make the experience even more terrifying. Getting to the hospital might be exactly what they need — but getting there in the back of a police car may be upsetting.

That’s why the University of Pittsburgh has shifted who responds to calls for welfare checks on students in crisis. Under a new partnership, announced in January and underway, campus police and mental health professionals will jointly respond to some of those calls to reduce hospitalizations and “ensure that the least restrictive and most clinically appropriate intervention is applied.”

The program, called the Pittsburgh Higher Education Assessment and Response Team [HEART], seeks to de-escalate crises, limit repeat encounters with police and prevent trauma, particularly among students of color. But for now, clinicians are responding with police only to on-campus welfare checks between Wednesdays and Sundays from 3 to 11 p.m.

Mental health advocates, including some Pitt students, said they think the program and others like it could comfort students and provide a better response, but incorporating student feedback and empowering the responding clinicians is essential to an effective implementation.

“Having someone there who is trained to know how to respond to mental health crises can really help de-escalate the situation, make the person more comfortable and connect them to the care and the support that they need,” said Amy Gatto, senior manager of higher education and evaluation at Active Minds, a national nonprofit supporting mental health education and awareness.

Despite requests from PublicSource, Pitt declined to make anyone available to speak about the program, opting to email statements in response to questions; the university also would not disclose any numbers about welfare checks and how often its police respond to mental health crises.

Students, though, have talked about the need for a different response for years, according to Kamakashi Sharma, a senior and president of the university’s Active Minds chapter. The arrival of police can be “a little terrifying” for students in crisis, who may want to be alone or receive support, she said.

The program adds to existing support options available to students in distress. Students may contact the university’s counseling center 24/7 if they’re in crisis, but for all emergencies “where danger is imminent,” they are encouraged to contact 911 or campus police, according to a Pitt statement.

Eva Steele, a third-year student majoring in social work, said a student she was close with experienced a life-threatening mental health crisis at Pitt. Campus police took the student to the hospital, but without a clinician on the scene, they were with the police until a social worker conducted an intake at the emergency room, Steele said.

“Those first moments of contact you have with someone really make a difference,” she said. “I personally believe that if a clinician had been there, you know, the experience itself would’ve been a lot less traumatizing for this person, and that they may have been able to help them a little bit better so that they could get long-term care.”

Nadiyah Fisher, a junior and vice president of the university’s chapter of the National Alliance on Mental Illness, said students have described being afraid when police showed up to transfer them to a hospital during a crisis.

“Just the idea of putting you in the back of a police car when taking you to a hospital was very unsettling, which calls for the need for the HEART program,” said Fisher, who said they’ll be a member of the program’s advisory committee of students, faculty, staff and community members. Pitt did not provide specifics on what transfers will or won’t involve under HEART.

HEART clinicians and Pitt Police will collaboratively determine how to best support a student in crisis, and the teams have undergone training to learn how to work together during these situations, according to a university statement.

“Every student situation is different and therefore is managed unique to that moment. The health, wellness, and safety of our students is our top priority in the moment,” a Pitt statement said. “HEART clinicians will work collaboratively with the Pitt Police and Residence Life staff to ensure each individual situation is managed appropriately.”

With increasing numbers of students experiencing mental health concerns, universities have been compelled to adapt their responses, said Josh Bronson, director of education and leadership development at the International Association of Campus Law Enforcement Administrators, a membership organization.

Universities are well-positioned to implement co-responder models between police and mental health professionals because of the ease of collaboration that many campuses have already fostered, he said.

Through the HEART program, Fisher wants students to feel safe seeking help, informed about the response and comforted during transfers — not like “a criminal in the back of a van.” They hope the program will reduce the stigma surrounding hospitalizations, too.

Jennifer Espinoza, a junior who previously worked as a resident assistant, said the program makes her feel a bit better about the future of mental health at Pitt. “I’m in support of it, but there’s always room for improvement.”

Espinoza and Sharma both would like the program to be offered more continuously throughout the week. Mental health crises don’t just happen between Wednesdays and Sundays, Espinoza said.

Potential expansion of the program will be informed by data and the recommendations of the advisory committee, the university stated. “This program is still in its infancy, and we expect to develop, expand, assess and revise as we continue moving forward.”

Sharma sees the HEART program as a positive first step in mitigating anxieties, and she likes its emphasis on de-escalation and destigmatization. But some students, she said, are still concerned with police being involved.

Pitt Police should prioritize the knowledge of the HEART clinicians when responding to a crisis and learn from them, Steele said. “What I would like to see is that, within this interdisciplinary team, all members are taking initiative to make sure that they are learning what it takes to be trauma-informed.”

To provide the most effective and appropriate response, it’s important for universities like Pitt to gather feedback from students who’ve been in crisis and ensure that they have a platform and opportunity to share their perspectives, Gatto said.

“Institutions of higher education, they have this incredible resource of students who have experienced this,” Gatto said. “I think that’s where you’re going to get some of the most critical but most helpful feedback in building this program.”

Pitt plans to evaluate the program by collecting and tracking data, creating criteria for measuring successful de-escalation and intervention and forming a process for identifying students whom the HEART program repeatedly engages with, the university said in an email.

Bronson expects to see more universities establish co-responder models, but he noted that they’re not one-size-fits-all.

“Varying the approach, depending on the size of the agency, the capabilities of the campus, is really important,” he said. “At the same time, really focusing the attention on that partnership, whatever that ends up looking like, between mental health and the public safety or campus police officers, is really the key.”

Jennifer Morse, executive director of counseling and wellness at Chatham University, wondered what a version of the HEART program might look like at the smaller private university. She thinks the HEART program’s combined approach is “fabulous,” but she said the frequency of mental health crises is a driving factor behind developing a similar program, and Chatham has seen few.

For now, her goal is to prevent crises by making counseling more accessible and decreasing the stigma around getting help.

“I don’t think police really wish to be in the mental health, and specifically mental health crisis, space. Yes, they get some training, but I don’t think it’s where their hearts are,” she said. “As a psychologist, it is where my heart is. So, wouldn’t it be great if we had more of that? We don’t currently have that.”

“When we think about campus communities, we’re a community, and that involves people sharing responsibility, being responsive and being proactive,” Gatto said. “There could be a nice partnership there to build a strong program, if done effectively.” 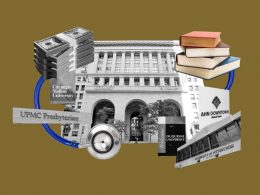 The county's five largest nonprofits, including three universities, pay 11% of what they would owe in property taxes if they didn't receive exemptions and abatements. 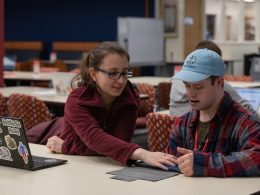 College programs for students with disabilities are growing in Western PA, but some have faced challenges

The number of inclusive post-secondary programs has continued to grow in Pennsylvania. But they are complicated to offer, and some have faced instability. 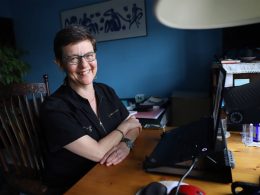 “Oftentimes, as we get older, I think we feel invisible, and I think that’s especially true with LGBTQ folks. We can feel like our stories don’t really matter.” CCAC’s enrollment dropped during the pandemic. What could this mean for Allegheny County?

More than nine in 10 of graduates of the Community College of Allegheny County go on to live and work locally, but thousands fewer students have enrolled during the pandemic.