U. of Colorado names Todd Saliman sole finalist for president

byJason Gonzales
Photo: U. of Colorado

University of Colorado System Regents selected Todd Saliman as the sole finalist in its search to find the next president of the four-campus CU System.

The board voted unanimously after about 10 minutes of deliberation to name Saliman the only finalist from an original field of 39 candidates. Saliman was the system’s chief financial officer and was named CU System interim president in June.

“Mr. Saliman demonstrated his ability to work well with the board and bridge the gap between elected officials and the broader university community,” Regent Sue Sharkey said.

Supporters praised Saliman, 55, for his ability to work with different constituencies and his knowledge of the university system, but even before the announcement, Latino advocacy organizations raised concerns about the process. Saliman’s insider status could be both an asset and a deficit as he seeks to rally support and lead the university forward.

Over the next two weeks, Saliman will visit each campus and the system office to answer questions at open forums. He will also meet with school staff and leadership. Members of the CU community will have an opportunity to provide feedback, according to the letter. The board will elect a president the last week of this month.

If named as president, Saliman will oversee the University of Colorado System, which includes about 65,000 students at four campuses in Boulder, Denver, Aurora, and Colorado Springs.

Regents Chair Jack Kroll said the process was thorough and extensive. Saliman showed an ability to work with the board and understand the state and university budget, Kroll said.

“We had five highly qualified candidates that the board interviewed, each with compelling visions for the university,” Kroll said. “The board advanced who we believe to be the best person in this process, and we look forward to receiving input from the public on how they receive Todd Saliman’s vision.”

Last year, the University of Colorado Board of Regents paid former President Mark Kennedy $1.3 million to leave his post a year before his three-year contract expired. Kennedy announced his departure soon after the November election, when the board flipped to majority Democrats.

He was hired in 2019 in a contentious party-line vote after the then-majority Republicans named him the sole finalist. Faculty and students questioned his experience and pointed out that as a Minnesota congressman he voted against LGTBQ rights, though he later said his views evolved on gay marriage.

As president, Kennedy’s actions sparked backlash, with students and faculty saying his comments devalued people of different backgrounds. Faculty members said that Kennedy didn’t consult enough with them on important decisions, such as creating an online education system during the pandemic.

After his departure, the board kicked off a monthslong search for candidates who could create a more inclusive campus for students, work collaboratively with faculty, and bridge the political divide that marked the start of Kennedy’s presidency. The regents formed a 19-member search group led by board member Lesley Smith that included professors, alumni, and community members.

On Monday, ahead of the announcement, the board released an email saying the search firm Storbeck Search presented the committee with 39 candidates — 13 women and 26 men, including 13 candidates of color.

The search committee eventually interviewed seven women and three men from seven states. Two of them were candidates of color, according to the board letter.

Kroll said five candidates were then interviewed by regents. He wouldn’t describe the candidate interviews. He said each candidate shared a strong vision for the university system.

Chris Hilton, a University of Colorado Denver student body president, helped select the candidates as a member of the search committee. He said the process brought in impressive candidates and Saliman underwent more scrutiny because he was the internal candidate.

He said that reviewers looked deeply into each candidate. That Saliman came out on top is a testament to his leadership, Hilton said. He said that Saliman paid attention to student issues throughout the process.

“I’m happy it is Todd, because this is someone that will gladly give a student his number,” Hilton said.

Already, the regents will need to quell concerns.

United Campus Workers Colorado union organizer Denise Fernandes said there are questions as to why regents spent time on a search when it seemed inevitable they would select the internal candidate. She said she worries that Saliman won’t advocate strongly enough to boost higher education funding in the state. The union represents faculty, staff and student workers at CU campuses.

“Just looking at the way he handled finance and budget during the peak of the pandemic has been frustrating to a lot of members out there, especially with stagnating wages and increasing student debt,” Fernandes said.

The Latino leadership organization filed a complaint last week with Colorado Attorney General Phil Weiser’s office, saying the process for choosing a new president is “fatally flawed” and that the group and the Latino Action Council “are outraged by the process where we see direct conflicts of interest.” The complaint also said the committee isn’t diverse.

Kroll said the search committee was the most diverse in the history of the system and included representation from numerous communities.

“Unfortunately, Mark Kennedy was not a lesson for them,” Carrera said. “It’s something we can’t continue to allow.”

Students who never went to college heard early in their lives that they didn’t have the money to go. No one told them that they could thrive academically. 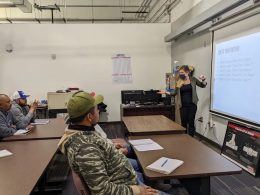 With an accelerated and practical curriculum, enrollment in the Community College of Denver’s non-credit English as a second language program grew from 50 to 400 students in two years.