byJason Gonzales
The Denver Scholarship Foundation surveyed Hispanic men who went to college, stopped going, and graduated to understand the barriers to getting to and finishing college. Eli Imadali for Chalkbeat

What barriers do Hispanic men face getting to and graduating from college?

None of this was surprising. But the strong sense of obligation students have to community and family and how it stymies individual ambition caught the attention of foundation leaders.

“It’s not easy for young brown men,” said Nate Cadena, the foundation’s chief operating officer. “There are certain roles, certain expectations, certain cultural norms, that don’t necessarily invite individualism, especially if it’s taking them away from their extended family or community. There’s this unspoken language of their culture — their community — that doesn’t necessarily foster individualism and exploration.”

The foundation, which helps Denver-area students navigate college, has sent about 82% of its scholarship recipients to college. But Hispanic men’s college-going and graduation rates have proven tricky. For example, Hispanic women served by the foundation reached college at twice the rate of their male counterparts.

To better understand the problem, the Denver Scholarship Foundation’s leaders gathered Hispanic men with differing college experiences. The foundation talked with those who never went to college, stopped going, and graduated.

“They talked about it being important to feel like they’re spoken to individually,” Cadena said, “There was so much rich information to pull out of it. But a lot of it was reinforcing what we thought and knew.”

The struggle of getting Hispanic men to college is an important issue for the state.

The low numbers play into Colorado’s large gaps in who has a college education and who doesn’t. About 61% of all Colorado residents have a college credential compared with only a quarter of Hispanic residents.

Cadena said the problem needs to be tackled, especially because 1 in 5 Coloradans identifies as Hispanic.

Cadena said getting more Hispanic men to college is about opportunity and freedom for individuals and families. It breaks generational cycles of poverty. Research shows college-educated individuals have better access to health care. Residents who hold a college degree also have higher earning potential and a greater ability to do what they want in life.

“If we allow this to continue, we are almost resigned to it. We allow it to be OK,” Cadena said. “That’s unacceptable.”

Those who never finished college often made decisions based on bad advice from an early age, the report found. Some attended schools far from home, didn’t connect to the campus community, and didn’t get the information, money, or mental health services they needed to finish school.

Hispanic men who did graduate reported having family support. Or they decided to continue with college despite the costs, and had teachers or mentors who saw their potential. They benefited from encouragement from an early age.

Those who went to college talked about expanding their network and job prospects. Those who never went to college said they want to push their kids to attend to have more opportunities. That group predominantly became entrepreneurs in labor-intensive jobs, but at a cost to their body and their time.

Cadena said the fact that all groups recognize the value of college argues for offering help tailored to individuals. He said the survey indicated the possibility of lifting people out of their norms.

“There was an acknowledgment that college breaks cycles,” Cadena said,  “and it breaks generational cycles.”

+ Want to read more about the challenges facing Hispanic men in getting to and graduating from college? You can read Jason’s two-part series on the issue here: 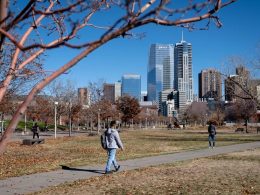 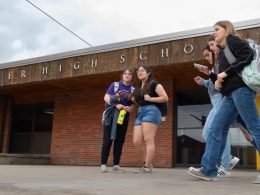