Correcting the record on a company-sponsored degree program that lacks a sponsor. Also, Missouri works with Wiley to recruit residents for targeted career services and training.

Not at the Table

If alternative paths to college degrees and good jobs are going to work for meaningful numbers of lower-income working learners, the growing consensus holds that both employers and colleges need to be at the table—often with an intermediary organization.

A new “sponsored degree” program announced earlier this month at a small event seemed to hit all the bases.

Arizona State and Northeastern Universities planned to enroll community college students who would be recruited by GetSet Learning, a small Chicago-based company focused on student retention, which would support participants as they completed bachelor’s degrees.

Most importantly, Deloitte was named as the initial corporate partner for the model, in which companies would pay for the students to earn degrees in exchange for a two-year work commitment.

One problem: Deloitte isn’t at the table.

“Deloitte and the Deloitte Foundation have no relationship with GetSet or its program described herein,” the company said more than a week after the program was rolled out.

I’m not really sure what happened. A Deloitte managing director spoke at the event in San Diego. And GetSet described the company as a partner in its announcement about the sponsored degree program.

One read is that GetSet was scrambling to lock in the various players before ASU+GSV, the Lollapalooza for education technology and investment. The complex deal involved multiple large organizations with their own existing and evolving relationships. Deloitte, for example, is an enormous audit, consulting, and tax services company with roughly 350K employees and annual revenue that tops $50B.

Another potential wrinkle is that corporations increasingly are investing in education and training programs though their foundations. Those gifts can be aimed at helping people in the company’s industry, among other goals. But to avoid running afoul of federal self-dealing rules for charities, funds can’t be used for impermissible economic benefits for the foundation’s parent corporation.

Google’s career certificates are perhaps the most established alternative credentials. The tech company’s philanthropies have supported the certificate program Grow with Google created five years ago, including with funding for a new $100M no-interest loan fund for students.

Google certs are designed to create entry-level opportunities for underserved populations in the broader tech industry, rather than to train workers on Google platforms or to recruit hires for the company.

Salesforce, however, directly funds its popular Trailhead skills training programs. The free online courses teach students how to use Salesforce and related tools. Meta takes a similar approach with its social media marketing professional certificate, a six-course online program on the Coursera platform that can lead to a Meta certification.

Whether or not to tap funding from a corporate foundation depends on what the program is trying to achieve. If the goal is to sponsor degrees for the company’s future hires, increasing the diversity and loyalty of its workforce in the process, experts say the money likely would need to come from the employer itself, not its foundation.

It’s uncertain at this point what will happen with the initiative managed by GetSet, or whether Deloitte or other corporations will participate in something like it.

GetSet says the program invites higher ed institutions and employers into a new ecosystem that reimagines and expands education and career paths:

“While we all share in that mission, the program itself is new and already evolving. We welcome everyone’s collaboration to turn this shared vision into substantial change. There is never a single path from idea to reality. Transformative change requires a big tent, and we look forward to working together to advance the higher ed and workforce experience for all.”

For now, however, this version of sponsored degrees remains merely an interesting concept (unlike the new model Grand Valley State University and a healthcare company unveiled last week). GetSet’s announcement was one of many ambitious pitches that cross the transom as companies and nonprofits scramble to gain traction in workforce education, which many see as a promising growth market.

The Kicker: Without a corporate partner, this one isn’t ready for prime time.

Millions of unemployed Americans qualify for federal benefits as dislocated workers, but only a small fraction participate in free education and training that could get them back on their feet. In Missouri, it’s only about 4 percent.

Dissatisfied with that participation, the state is trying something new: Instead of waiting for unemployed residents to come to them, they’re recruiting.

“We want to move to more of an admissions and coaching mind-set—instead of: You walk into the workforce center, and we show you how to navigate the computer and ask you to answer 97K questions,” says Mardy Leathers, director of Missouri’s Office of Workforce Development.

To help make the shift, the state is working with Wiley, a publisher and online program management (OPM) company that is increasingly interested in supporting state workforce initiatives.

Data First: The three-year partnership will cost Missouri $200K a year to start. For now, the focus is on data analysis to better understand the target population and employer needs, along with support for state staff development. But both the workforce office and Wiley expect to expand to a broader service agreement.

The ultimate goal is to connect at least 100K residents a year with targeted career services and training.

The partnership is a novel spin on recruiting approaches that online universities and OPMs have refined over the past decade—not without critics—as they sought to expand the market for working learners.

Missouri’s work with Wiley Beyond, the company’s education-benefit arm, signals a new phase focused on broader workforce training—a move that will require providers to serve some of the nation’s most vulnerable and hardest-to-reach adults.

“It’s an area of growth that we’re focused on for the future,” says Shruti Khare, senior director of product operations management at Wiley. “It has an immense amount of need.”

Starting Small: Before launching the partnership, Wiley and the state tested the idea with a pilot focused on getting dislocated workers in three regions of the state to enroll in training supported by the federal Workforce Innovation and Opportunity Act. It had a particular focus on enrolling residents in CompTIA certification programs.

Even so, hundreds of residents had unusable data, couldn’t be reached, or weren’t interested in training.

That rate, Leathers says, was a big improvement on the kind of response his office typically sees. And it helped make the case for moving the state’s job centers to a more targeted, consumer-oriented approach.

“We have to shift to remain relevant,” he says. “We’re realizing that it’s about consumer preferences, not about how we can best deliver something.”

Other states will be watching Missouri’s experiment.

The Kicker: “Every state is responding to this changing dynamic in the market,” Leathers says. “There’s a huge appetite, and we’re all sharing and seeing what we can learn from one another.”

Click here to read the full article on Work Shift.

The Minnesota State Colleges and Universities enrolled 26 percent fewer undergraduates in 2021 than in 2010, a drop from roughly 200K students to 150K, Ryan Faircloth reports for the Star Tribune. “This is a code-red moment for not only just St. Cloud State, but other regional institutions,” said Robbyn Wacker, the university’s president. “To survive in the current landscape of higher education, you have to create a new model.”

Among U.S. adults without a college degree, who are not currently enrolled in college, 44 percent say they have considered enrolling, according to a survey conducted by Gallup and the Lumina Foundation. Associate degrees and certificates were the top credentials of interest among unenrolled Americans. More than half of this group cited the cost of college as an important reason for not continuing their education.

Surveys show that Americans have dramatically changed their views on who should pay for higher education, shifting in recent years toward government responsibility and away from students and parents, researchers write for the Brookings Institution. “Given the tenor of debates over debt cancellation and free tuition, it seems that public opinion on the funding of college may be trending in a similar direction,” they write.

Colorado will create a skills-based hiring alternative to degree requirements by 2024 for the majority of jobs in the state’s government workforce, according to a new executive order from Jared Polis, Colorado’s Democratic governor. “Experience, skills, degrees—these are interchangeable to demonstrate your credentialing and ability to do the job,” Polis said this week.

Community colleges should better align short-term certificate and degree programs and rethink the relationship between credit and noncredit workforce offerings, according to a report from the Community College Research Center at Columbia University’s Teachers College. The researchers conclude that a federal grants program like one created in the wake of the Great Recession may be needed.

Few employers provide financial support or time off for their workers to pursue external skills training, according to a survey of small and midsize businesses in Canada and the U.S. that D2L conducted. The learning technology company recommends that companies help employees incorporate learning into their busy lives, which it says is essential for building pipelines of talent for jobs that may not yet exist.

P-TECH is an IBM initiative that combines high school and community college, with a focus on technology. An analysis by MDRC of New York City’s P-TECH schools found that students on average dually enrolled at the City University of New York at much higher rates than a control group. They also earned more college credits, according to the MDRC researchers, who will track the college outcomes of P-TECH graduates.

I’ve heard from several of you about interest in more in-depth reporting on intermediary organizations. We’ll be focusing on this in the newsletter and on Work Shift. Thanks for reading. —@paulfain 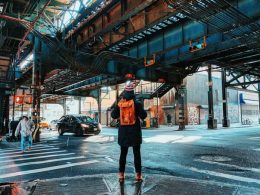