Plenty of people are staying in Cleveland. But it needs to draw more people in.

byAmy Morona
Cleveland State University, pictured here, has a higher percentage of graduates who stay in the area post-grad compared with Columbus, according to a new study.

When it comes to boosting a city’s talent pipeline, there seems to be a common refrain: attract and retain.

Both, of course, are important. But a new study suggests there’s far more to it than that.

It comes on the heels of the recently announced formation of the Cleveland Talent Alliance, a coalition of 11 local groups aiming to work together to attract talent to the area.

Piiparinen’s findings look at levels of educational attainment, or those residents with at least a bachelor’s degree, and how Cleveland’s rates compare with other metro areas.

Spoiler alert: not well. Cleveland’s metro educational attainment is 31.9%, per the brief. That puts the city 35th out of the largest 40 metro areas across the country. It lags behind other places in Ohio, too. Columbus leads at 37.4%, followed by Cincinnati’s 34.5% and Akron’s 32.1%.

Plus, there’s Cleveland’s roughly middle-of-the-road ranking for higher education research and development, or HERD, funding. The city ranks 18th out of those 40 large metro areas, compared with Columbus’ sixth-place ranking and Pittsburgh’s third.

Cleveland’s professional football rival also outperformed on another talent-related metric, too. Pittsburgh saw a 7.6% gain in its educational attainment rates from 2010 to 2020, behind only the Nashville and San Jose metro areas. Cleveland saw a 4.8% boost during that decade.

Cleveland actually does well when it comes to retention, per this report. People stay here.

There’s a less-than-scientific way to think about how this manifests in this city. Strike up a conversation with a stranger in Cleveland and it probably won’t take long to hear the question as common as a beer from Great Lakes Brewing Co.: “So, where’d you go to high school?”

The expectation, of course, is the answer falls somewhere in Northeast Ohio. You probably know someone who knows someone who knows the stranger with whom you’re conversing. All six degrees of separation never seem to be needed here. That type of talk, according to Piiparinen, can turn people off who aren’t from the region because it’s so parochial.

It is, however, one area where Cleveland aligns with Pittsburgh. The two cities, along with Buffalo, have high percentages of residents who were born in those states.

“These places that think everyone’s leaving, it’s actually no, we have too many people staying,” Piiparinen said in an interview with Crain’s Cleveland Business. “We have a lack of people coming in.”

For example, about 82% of Cleveland State graduates stayed in the city five years post-grad compared with the 67% of Ohio State University alumni who continue in Columbus.

Universities like OSU are better at “tradeable” higher education, when institutions have students from outside the area enroll and then buy local goods and services, Piiparinen said.

“In Cleveland, that’s what we do for health care,” he said. “We have massive amounts of patients coming into Cleveland for health care, but our higher ed system is not built that way. It’s built for locals.”

The attractiveness to getting people to areas like Boston or Silicon Valley can be attributed to people clustering in those types of places due to “better career prospects for the knowledge working demographic,” Piiparinen wrote in the brief.

So where that leaves Cleveland, it seems, is the continual $1 million question. One of the keys could be keeping entrepreneurs here. The area already “ranks highly when it comes to the concentration of local graduates who become entrepreneurs,” per the brief.

The other could hinge on research. Piiparinen wonders why the research and development landscape hasn’t been bolstered here yet, especially when looking at places like Pittsburgh and Baltimore.

Northeast Ohio has two universities — Case Western Reserve and Kent State — that have earned “R1” status from the Carnegie Commission on Higher Education. This means those institutions have been deemed to have high levels of research activity.

Kent State received the distinction for the first time earlier this year. Anything that increases the gravity of research and development in the region, Piiparinen said, is “terrific for economic development.”

“It’s getting the research that transforms the industries that grow the firms that increase the jobs that increase the migration into Cleveland for the knowledge worker demographic,” Piiparinen said. “You see how that’s much different than just saying, ‘I’m going to attract and retain talent.’ That’s an actual blueprint to do something.”

Yet the pools of potential talent continue to shrink. Ohio is projected to have a declining number of high school graduates. The pandemic amplified enrollment struggles many local higher education institutions, as well as peers nationwide, were already facing.

“Traditionally, how many communities, including Cleveland, have tried to work on the issue is by having a program or a couple of programs,” said David Gilbert, president and CEO of Destination Cleveland, the group working as the lead coordinator for the Cleveland Talent Alliance. “And not to say that individual programs can’t have some effect, but a program doesn’t change the issue.”

Gilbert said the kinds of data highlighted in this type of report and others will be “critical” to what the CTA wants to do. A March release explicitly stated its goals for 2022: building out the consortium’s operating model, creating processes, identifying key strategies and developing key performance indicators.

“We have to do this in a very scientific way,” Gilbert said. “We have to be able to be measured by progress, not activity.” 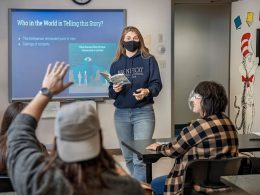 How Northeast Ohio’s private colleges are dealing with rising costs

Coupled with the ongoing pandemic and amplified enrollment struggles, it’s one of the latest hurdles these colleges are facing.