byStephanie Wang
Noemi Lozano encourages students to use Workforce Ready Grants for college. Earning a certificate in one year, for free, attracts students who may question the value of paying for college or incurring loan debt. Christian K. Lee for Chalkbeat

Four years is a long time.

Noemi Lozano sometimes hears that from students, who can’t imagine studying and paying for four years of college for a bachelor’s degree.

But Lozano, who connects families with resources for River Forest Schools in Northwest Indiana, doesn’t want those students to completely give up on getting a college education. So she offers a low-risk option:

Just go to college for one year.

In that year, students can earn a certificate that qualifies them for a skilled job. They can decide to keep studying, or they can get a job making more money than, say, in a retail or restaurant job.

“It’s a great start to just look at short-term goals,” Lozano said. “Then you go from there. It can take you anywhere.”

Plus, for hundreds of thousands of Hoosiers, that one year of college could come at no cost, though few seem to know that.

In Indiana, people who don’t have college degrees can get the training to become welders, electricians, medical assistants, web programmers, or truck drivers — for free.

The Next Level Jobs Workforce Ready Grant foots the tuition bill for certain certificates in high-demand fields. The state touts that grant recipients increase their salaries by a median $6,800 a year after completing such training programs.

It’s part of Indiana’s bid to increase the number of college-educated adults and meet changing workforce needs. And it’s an attractive deal as students are questioning the value of college amid skyrocketing tuition and the albatross of student loan debt.

“Especially for working adults, they need a quick solution,” said MJ Michalak, vice president of public affairs for Ivy Tech Community College. “They just need something to get them to that next step.”

Still, advocates and experts say the state can do more. It’s not clear how effective the grant is in advancing students’ careers. Officials don’t track how many students drop out without finishing the certificate, nor do they look at what kinds of jobs graduates go on to hold.

And a bright spot in the program — that it attracts more Black and Latino students — could also pose the danger of steering students of color away from four-year colleges and into lower-paid jobs.

“If we’re only pushing Workforce Ready Grants on our students of color, then we’re going to be in a not-helpful situation,” said Rachel Santos, education policy director for the Indiana Latino Institute. “It’ll feel good for a little bit, and then we’ll be looking at a ton of inequity.”

What the workforce grants pay for

When Laura Rucoba was job hunting, she applied to so many places and got denied so many times.

Having worked in restaurants, at Lowe’s, and in an elementary school as a paraprofessional, Rucoba wanted to work in a hospital or doctor’s office but learned she needed to have a certification.

College had always been at the back of her mind. But life was busy. Rucoba, 41, was raising two children and didn’t want to take on student loan debt.

“I just thought it was something that was impossible for me to do,” Rucoba said. “I just couldn’t comprehend how at an older age, I could go back to school.”

Rucoba found out about the Workforce Ready Grant from Lozano, her sister, and enrolled in a medical assisting certificate program, which advertises salaries ranging from about $31,500 to $49,000.

Since finishing her technical certificate last year, Rucoba has worked in a pediatrics office in northwest Indiana, checking in patients, taking vitals, reviewing charts, and giving shots. The pay is better than her previous jobs, she doesn’t have to work weekends, and she sees opportunities to advance if she earns additional certifications.

“I truly enjoy what I’m doing right now,” Rucoba said. “I’m in a spot right now where I thought I was never going to be.”

The Workforce Ready Grant is part of a larger initiative called Next Level Jobs, launched five years ago, that focuses on helping Hoosiers get skilled jobs. The state prioritizes five industries: advanced manufacturing, building and construction, health and life sciences, information technology and business, and transportation and logistics.

Within those areas, Indiana identified certain certificate programs that it would pay for through the Workforce Ready Grant, such as cybersecurity, HVAC technician, and supply chain management.

Unlike many scholarships, students don’t need to qualify financially to receive the grant. They can use it at certain providers, such as Ivy Tech. During the pandemic, the state extended grant eligibility to additional programs and to college-educated people seeking to switch careers.

The state makes a relatively modest investment in the workforce grants, spending $3 million per year. To reach more students, Indiana stretches its dollars by combining the grant with need-based federal Pell Grants and other state funding for adult students.

But what are the results?

Since its start in 2017, nearly 60,000 students have used the Workforce Ready Grant.

But here’s where the picture gets a little cloudy.

That’s a statistic the state hopes to eventually be able to crunch. Regardless, Indiana’s higher education leader Chris Lowery acknowledged that more students should be finishing their programs: “I’d like to see us have a greater completion rate,” he said. “I’m not satisfied with that. I think it needs to be higher.”

The pandemic has also delayed the state from looking at what one expert considers the most important outcome: whether grant recipients went on to get jobs.

And not just any jobs — but better jobs than they had, in the fields that they studied.

“The best way to center quality is to focus on the labor market outcomes of people who go through this training,” said Shalin Jyotishi, senior policy analyst for education and labor at New America, a public policy think tank.

It’s not enough to report that graduates make more money, Jyotishi said, because that doesn’t necessarily mean a person is no longer facing poverty or that they have landed a job in their field that pays well and offers good benefits.

“That’s where a lot of those programs tend to mess up,” Jyotishi said. “They tend to report an increase in earning, and that is a great outcome, but it doesn’t necessarily achieve the goal of economic security.”

California, for example, surveys community college students on career and technical education outcomes — although only about a third respond — and publicly reports how many work in jobs related to their field of study, how many earn a local living wage, and their median earnings.

Jyotishi pointed out that some of the professions supported by the Workforce Ready Grant, like pharmacy technician or phlebotomist, can still be low-paying jobs.

In Indiana, state officials say they don’t want to burden providers with the additional request to report job outcomes. Instead, they say jobs data is already available, through the same back-end tracking of state workforce data that shows the $6,800 median wage increase.

It’s just that because of other demands created by the pandemic, state officials haven’t looked yet at the data to see whether grant recipients secured better jobs with their new qualifications.

Concerns about students of color

Last year, Indiana ramped up marketing for the Workforce Ready Grant, more than tripling efforts to spend $2.5 million on hyping the program.

Still, not enough people know the opportunity exists, advocates say, and those who pursue it don’t always have clear pathways to jobs or further education.

The state is trying to reach two types of students: recent high school graduates around 18 years old, and adults who have been out of school for some time.

Adults who have jobs, families, bills, and other responsibilities are likely the toughest student population to reach. Going to college as an adult means rationalizing the expense and time to study, and possibly even giving up a job that supports a family.

The payoff has to be worth it.

In recruiting students for the Workforce Ready Grant, state higher education officials believe they’ve unlocked a key strategy that has the potential to improve college enrollment across the board. Aside from billboards and Facebook ads, the state has also turned to trusted messengers like community organizations and churches.

The Indiana Latino Institute is one of those organizations. Among its education programs, the group works with high schoolers on applying for financial aid for college.

Rachel Santos, the institute’s director of education policy, says students often are unaware of the free training opportunity, and she worries there’s some confusion about who the grant is supposed to serve.

She’s not surprised that the Workforce Ready Grant has attracted a larger share of Black and Latino students among the overall college-going population.

Still, Santos believes bachelor’s degrees should remain the larger goal. She wants to see the state take a more intentional approach to showing how a student can advance from a certificate to an associate degree to a bachelor’s degree, so that students of color aren’t further tracked into lower educational attainment rates.

It’s often harder than it should be for students to know how to “stack” credentials and transfer credits, she said.

“We should not just be pushing our Latino students toward the Workforce Ready Grant because it’s a paid program and we need more people doing hard labor in the workforce,” Santos said. “It has to be seen as a small piece of the bigger picture.”

Noemi Lozano, the parent liaison, uses herself as an example when she talks to families about postsecondary options. She also works on Latino college outreach for the state through its Padres Estrellas program, or Star Parents.

Lozano had started studying business before putting college on pause while she raised a family.

Then, one day, her children brought home a flyer from school about the Workforce Ready Grant. With her children heading to college, and her tuition paid for by the grant, Lozano found she had no excuse for not going back to school.

She earned a business certificate, then finished her associate degree. Now she’s transferring her credits from Ivy Tech to Indiana University-Northwest to work toward her bachelor’s degree.

“I started with a certificate — it was a little step,” Lozano said. “Once I started, I said, I am not just stopping.” 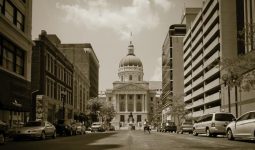 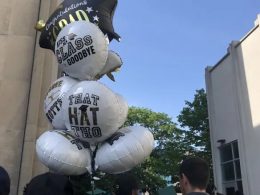 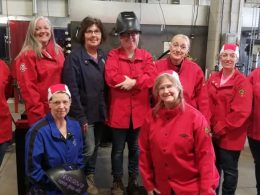 ‘Women in welding’: This Indiana high school teacher is on a mission to inspire girls to take her shop class

"When I applied for my first welding job, it was a struggle," Kim Rosenbaum said. "They weren’t sure if they wanted a female welder there. I convinced them that I can do this."