Why class matters in first-gen spaces

This week’s First Gen is written by Savannah Sima. Sima is an undergraduate student at the College of Wooster and the University of Oxford in Philosophy and Politics. Sima will be pursuing graduate studies in philosophy after finishing their senior thesis.

There are times when ‘first-generation’ is used by colleges and universities as an all-encompassing term for both first-gen and low-income students. In doing so, accommodating low-income students becomes an institutional challenge.

The label first-generation includes such a wide variety of identities and lived experiences that designing services that inclusively support all students with this label in mind often ends up underrepresenting low-income students. What constitutes a first-generation student differs, depending on the institution.

Nearly 33% of students attending a college or university in the United States are first-generation, according to the Center for First-Generation Student Success. The assumption is often made that being first-gen also means coming from a low-income background, but this isn’t always the case. While those two experiences can intersect, making that assumption can do a disservice to both groups of students.

At my home institution, The College of Wooster, there is a staggering amount of programming for first-generation students that centers around financial literacy and breaking into professional spaces, without talking directly about economic status. This programming then ends up missing the mark for students experiencing outright poverty or any financial hardship, because not every first-generation student is low-income and some don’t need as much access to financial programming as the college assumes.

The students that do need support, feel alienated from spaces that extend these finance-centered programs because our stories and frequent financial hardships are stigmatized and not relatable to students and staff who are first-generation, but not low-income. Low-income voices are then overshadowed by students who identify as first-generation but do not need the same level of support and financial considerations.

Universities and first-generation communities broadly need to make a basic distinction between ‘first-generation’ and ‘low-income’ to accurately extend visibility to students who have directly experienced, and continue to experience, poverty. Utilizing first-generation to capture the economic status of students conflates the two labels and leads to an underrepresentation of low-income students, who struggle financially throughout college.

It seems that some institutions use the term first-generation to avoid directly confronting poverty and socioeconomic status. First-generation groups and higher education institutions need to begin destigmatizing the term low-income as it’s the most descriptive and concretely identifiable term for conversations about socioeconomic class and financial hardship for students.

Clear and direct language will help to create more effective programming for students and will encourage open conversations about poverty. When you avoid directly identifying the economic status and conflate these terms, you grossly underserve and misrepresent low-income students who then are likely to become disillusioned with institutional support.

Closing one chapter, and stepping into the next.

The quiet cost of being a first-gen college graduate

"Being the first and only college graduate in my family, I am expected to shoulder the bulk of whatever expenses land on our door."

How to survive your family: A first-gen guide

Communicate your feelings. Keep them informed. Be empathetic. 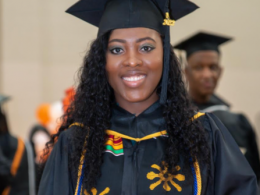