Another top Cleveland State University leader is leaving the institution.

Vice president of human resources/chief human resource officer Jeanell Hughes is set to officially depart this November. The move comes just months after former president Harlan Sands and CSU’s board “mutually agreed” that Sands and the university should separate.

In the letter, Hughes seemingly alluded to a separate conversation with Bloomberg, where it was agreed Hughes’ last day would be Nov. 18. Hughes asked for several additional considerations, including transitioning to a remote role beginning in July.

She also asked for her compensation and benefits to remain unchanged, as well as to maintain full access to her email and files, a chance to “review with input” a public statement on the departure, and to receive positive references from Bloomberg or any other CSU leaders, per the document.

In a response, Bloomberg agreed to Hughes’ request to work exclusively remotely until November. As of July 25, per the letter, Hughes would be “relieved of all duties as vice president of human resources and chief human resource officer,” though her title, compensation and benefits will remain unchanged until November.

Bloomberg asked for a transition document outlining “specific deliverables” for the remaining days and said Hughes would report directly to the president for the remainder of her time. Hughes’ salary and benefits will end if she gets another job with a start day before mid-November. The letter also noted Bloomberg will provide a “non-disparaging” reference if asked.

Hughes was hired at a base salary of $200,000 in October 2018 to become the university’s chief talent officer/chief human resources officer. That number rose to $275,000 when she was promoted to Sands’ chief of staff in early 2021. The university said she returned to working in human resources in March, though a document in Hughes’ personnel file shows a record of a transfer effective on April 25, a day before Sands’ departure was announced publicly.

Hughes and Sands have crossed paths professionally at several points over their careers in addition to CSU, according to dates listed on their respective LinkedIn accounts.

Bloomberg shared the news with faculty and staff via email in late July, writing that Hughes will be working directly with the president “over the next several months to ensure a smooth transition and advance some CSU strategic priorities.” The president also thanked Hughes for “significant contributions” to the university as well as Hughes’ advocacy for CSU’s staff and faculty.

The human resources department is currently reporting to senior vice president of business affairs and chief financial officer David Jewell until a long-term strategy is finalized, per Bloomberg’s email.

The U.S. education secretary called them a "joke." Here's how Ohio college leaders perceive them.

This semester seems to mark a stronger return to whatever "normal" looks like now.

The group is targeting a specific group of people who stopped out of college and whose transcripts are being withheld over outstanding institutional debts. Think things like unpaid tuition and/or fees owed to the college, not student loans. 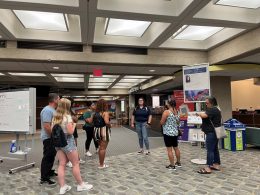 How the University of Akron is talking with potential students

For UA, like many of its peers, the outcome matters now more than ever. The COVID-19 pandemic amplified enrollment struggles many were facing even before 2020 amid shifting demographics.