byDivya Kumar
A view from inside the Muma College of Business at the University of South Florida campus in Tampa. The university is asking for $50 million from the state to help it achieve more prestige. [ ARIELLE BADER | Special to the Times ]

The goal has been on the University of South Florida’s wish list for more than a decade now — joining the nation’s premier league of more than 60 research institutions.

Entry into the Association of American Universities is by invitation only. But in its state budget request for next year, USF is hoping a $50 million allocation can help it get in.

After a historic 2022 budget year in which USF received more than $245 million in legislative funds, a board of trustees work group this week approved a list of requests for next year that amount to another big ask.

On top of the $50 million, the university will ask for $20 million to fund a planned oceanographic science center in St. Petersburg, to be followed by annual requests over the next three years totaling $60 million. Officials at USF are spreading out their requests for the center after Gov. Ron DeSantis vetoed a lump sum $75 million allocation earlier this year.

USF also is asking for $6.2 million to help fund its participation in the Florida Institute of Oceanography, a St. Petersburg-based consortium of 30 universities, state agencies and other organizations working on marine and coastal research.

In addition, the university is requesting about $90 million to pay for other capital projects next year, plus another $3 million for a STEM nursing facility on the Sarasota Manatee campus.

But its primary academic focus is on gaining membership into the national association and becoming a top-25 public university as ranked by U.S. News & World Report.

According to its request, USF is on track to compete at that level based on several metrics: six-year graduation rates for low-income students receiving the federal Pell grant, average student loan debt of graduates, retention rates for first-year students, percentage of small classes and incoming SAT scores, among others.

The metrics where USF lags behind its aspirational peers, however, relate to how the university is funded. Those include average amount spent per student, average faculty salary, proportion of full-time faculty and faculty-to-student ratio.

Interim provost Eric Eisenberg said the average public institution in the Association of American Universities has resources to invest 77 percent more per student than USF and pay faculty members 34 percent more on average.

Mark Walsh, USF’s assistant vice president for government relations, said campus leaders are hoping the data will help state officials see what the university could do with more resources.

The additional resources, Walsh said, would be used to help the university implement its strategic plan.

The money would go toward initiatives like improving incoming student profiles and retention rates, reducing class sizes, making new hires in strategic areas, and increasing full-time faculty and the proportion of faculty with the highest degrees in their field. It also would go toward growing partnerships and patents, and diversifying students and faculty.

Currently, Florida’s only Association of American Universities member is the University of Florida, though Florida State University has also set a goal to join the group.

In their request, USF officials make the case that more schools in the association are better for the state and bring in more federal dollars. They argue that Hillsborough County is more populous than Alachua and Leon counties, where UF and FSU are based.

California has 10 institutions in the association, New York has six and Texas has three. Membership in the group also has played a role in athletic conference realignment, which can lead to more dollars coming back to the university, the request said.

It argued, too, that “the most talented faculty, students and entrepreneurs gravitate to the most prestigious universities,” particularly when they are in large metropolitan areas, and that USF’s membership in the association would boost the State University System’s prestige.

Though the request was submitted to the state Board of Governors in July, it is pending approval by the full USF board of trustees in September.

Board chairperson Will Weatherford, a former speaker of the Florida House, praised the ambitious request. 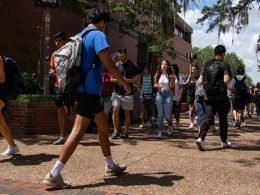 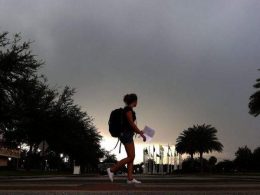