In Florida, public universities are leaving some behind

byScott Smallwood
Students at U. of Florida this month. (Tampa Bay Times)

Lots of attention this week went to Columbia University’s fall in the U.S. News & World Report rankings — dropping from No. 2 to 18 after the university admitted to submitting incorrect data.

Meanwhile, much less national press went to the continued steady rise of a set of public universities a thousand miles to the south. For years, the University of Florida was perceived as a very solid public flagship. Now it’s reached the top echelon, climbing from No. 58 to 28, becoming the fifth highest ranked public.

And it’s not the only one jumping. Florida State University has risen from outside the U.S. News top 100 to No. 55. And the University of South Florida has cracked the top 100.

That gives those universities lots to crow about each fall in press releases. USF, for instance, touts itself as “America’s fastest-rising university” because it’s climbed from 170 to 97 in the last decade.

Here’s something that doesn’t get mentioned in those press releases: while the rankings have climbed, the share of low-income students enrolling in these top flight Florida publics has fallen.

In fact, at UF and FSU, the total number of students getting Pell Grants is down 3,000 since 2014, even though overall enrollment is up sharply.

This shift is the focus of a story this week from our newest local partner — the Tampa Bay Times. Divya Kumar and Ian Hodgson, our two reporters there, examined how the state’s own performance-based funding system may be contributing to the decline.:

Florida’s State University System has noticed the decline in access, and officials say they need to address it. At their June 29 meeting, some members of the Board of Governors expressed concern over a chart showing that the percentage of Pell students declined at all but one of the 12 state universities in 2020, the latest year for which data was available.

The number of Pell students actually increased at some schools, but not enough to keep up with rising enrollment. Across the whole system, the number of Pell undergraduates fell by more than 1,800 from 2014 to 2019, while the total undergrad population increased by nearly 29,000.

One of the system’s goals is to ensure that Pell students make up 30% of undergraduates at every university by 2025 — a mark the University of Florida and Florida State have missed every year since 2014. Meanwhile, the state’s lesser-known schools have been picking up the slack, taking on the job of educating the state’s poorer students.

“There’s a disturbing trend,” board member Eric Silagy said. “As Florida State and UF have increased in the ranking, it is tough to meet the goal and the trend is going the wrong way.”

The pair also talked with Michael Itzkowitz, of Third Way, about his recent “economic mobility index,” rating colleges on how well they serve low-income students. The good news is that UF, Florida State and USF all scored well on those measures.

But — as Divya and Ian wrote — “to benefit, low-income students have to get accepted.”

++ More context. Florida is home to one of the largest state merit-aid programs — Bright Futures. We dug into it and similar programs earlier this year: How popular merit scholarships have perpetuated racial inequities across the South

We’re thrilled to welcome Colleen Murphy as our first managing editor. Colleen is an experienced editor who’s led a team of student journalists covering higher ed with our partner CalMatters, created curriculum for a course on policy reporting at the School of the New York Times, and spent several years as an editor of tax coverage at Bloomberg. (We first met Colleen when she was an intern at The Chronicle many years ago.)

Colleen will bolster our growing network of local reporters across the country, amplifying their coverage and creating tools and structures to support their work. She’s particularly interested in finding ways to help local reporters collaborate on stories and share insights from their communities with one other.

“There’s a huge opportunity for analytical, creative stories about higher education that explain topics without jargon and center voices of people who are impacted by policy decisions,” Colleen says.

“This is the kind of coverage that will help narrow the gap between the realities of higher education and what the public understands about it. I’m really interested in efforts to increase media literacy and build trust with audiences, and I think higher education news offers that opportunity, because everyone’s lives have been touched by college in some way, good or bad.”

Plus, there are higher ed stories everywhere, she adds, “which makes it an editor’s dream!”

We’re hitting the conference circuit this fall and would love to say hello. Please reach out if you’ll be at any of these events, too:

Colorado has some of the nation’s largest gaps in college completion between Black and Latino residents and their white counterparts, Jason Gonzales reports. Can it turn the tide with a post-pandemic push to bring back students who left and help them finish their degree?

In a flurry of petitions, Carnegie Mellon University students and faculty — plus allies from around the world — are blasting the school’s reaction to a professor’s anti-colonialist tweet issued as Queen Elizabeth II was dying. Emma Folts reports from Pittsburgh.

Molly Minta has been profiling activists in Jackson, Mississippi, who are fighting for clean, running water. Her first focused on Maisie Brown, a Jackson State University junior who has raised more than $6,000 and assembled students who have delivered about 1,000 cases of water to more than 200 homes:

“The whole structure of government, the way it’s built today, is not enough to help people,” Brown told her. “That’s the wall people are running into.”

(Also, check out this viral tweet from Molly about her own discolored water.)

What our reporters across the country heard about Biden's announcement: a mix of relief, disappointment, and lingering stress.

Should college be the bar for clemency?

Petitions for clemency must address two questions: Why do you need relief, and why do you deserve it? For Johnny Pippins, education is the answer to both. 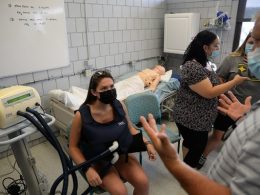 A threat to a city’s ‘eds and meds’ renaissance?

Pittsburgh's health professions are threatened: Enrollment in key training programs is plummeting as is job satisfaction in many of those careers.