byMolly Minta
The reception at Belhaven Summit was decorated with pictures of trans people killed in the last year. Credit: Molly Minta/Mississippi Today

In Belhaven on Sunday night, members of Mississippi’s LGBTQ community solemnly placed roses on a blue, pink and white flag as they read aloud the names of 70 trans people killed in the last year in the U.S. – a figure that’s almost certainly an undercount.

Gatherers flipped through a booklet with pictures of those who had been killed, including including four Black trans and gender non-conforming people in Mississippi: Mel Robert Groves, 25, from Jackson; Kesha Webster, 24, from Jackson; Shawmaynè Giselle Marie McClam, 27, from Gulfport; and Jimmie “Jay” Lee, 22, from Oxford.

“That weighed heavy on me,” Jensen Luke Matar, a trans community organizer, said after the final name was read aloud. “You look at those names, you look at those ages, you catch those cities – the ones you have connection to, the ones you were born in. Some right here in Jackson, in our backyard.”

“This is real y’all, this is real lives,” he continued. “You recognize how many trans and non-binary people are in this space right now? That could’ve been any of us.”

More than 60 people attended the service at Belhaven Summit which was held the day after a shooting at an LGBTQ nightclub in Colorado Springs left more than five dead and at least 25 wounded. The shooter has been charged with a hate crime, and the attack has been attributed to a national rise in anti-LGBTQ sentiment.

The emotional ceremony was organized by several Mississippi-based LGBTQ organizations and nonprofits as part of Transgender Day of Remembrance, an annual, international vigil to highlight violence experienced by the community. For more than two hours, gatherers laughed, cried, shared resources and sought not just to mourn but to celebrate their trans community members who are still living.

Across the country and in Mississippi, trans people face an epidemic of violence, the brunt of which is borne by Black trans women. This violence is rooted in a web of anti-trans forces, experts say, including an increasingly hostile political environment, widespread misconceptions about trans people and prescriptive cultural and religious beliefs – all of which are present in Mississippi.

Last week, Tate Reeves’ unveiled priorities for next year’s legislative session include a “Parental Bill of Rights,” which he described enabling parents to determine what pronouns their children should be called in public school.

A report by the National Center for Transgender Equality notes that just over 25% of trans people killed this year lived in Texas and Florida, two states that have passed prominent anti-trans legislation.

Following the service, there was a reception with cupcakes made by Tayla Carey, a trans woman whose brother, a well-known Black, LGBTQ student at Ole Miss named Jay Lee, was murdered earlier this year. Several of Lee’s friends drove down from Oxford for the vigil.

Carey shared a poem she had written for Lee, tearing up because it was the first time she’d read it aloud.

Some of the resources that were shared at the memorial included: Sarah Schnaithman, a trans lawyer in Amory, Miss.; the TRANS Program, which advocates against anti-trans legislation, assists with gender marker change applications and provides peer support; Grace House Services, a transitional home for individuals with HIV/AIDS; the ACLU of Mississippi; Capital City Pride; and Awakening Love, a trans-led nonprofit that provides short-term financial assistance.

Transgender Day of Remembrance was started in 1999 to honor Rita Hester, a Black trans woman whose murder still has not been solved. In a 2020 article about Hester’s life, NBC News noted that “for many in the trans community, the day is the only annual gathering they have.” 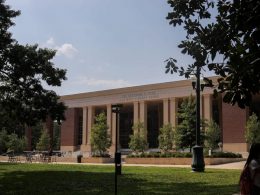 The issue at hand is, in part, how the plan could affect tax revenue and funding for higher education in Missouri.