byJason Gonzales
Sabastian Ortega, 21, center, talks with classmates in a laboratory at Colorado School of Mines in Golden, Colorado, on Jan. 17, 2023. The school, the most selective public university in Colorado, ranks toward the bottom in the nation in students receiving Pell Grants.Hyoung Chang / The Denver Post

Sabastian Ortega’s mom cried when he told her he was accepted to the Colorado School of Mines. He thought, as he talked to her on the phone, that she was crying tears of joy. She wasn’t.

Instead, his mom worried about whether the family could help pay for school — tuition alone is about $17,500 a year for in-state students. And living on campus can cost about $40,000.

“It hit me hard,” Ortega said. “I ended up crying once I hung up because I was wondering, ‘How am I going to pay for this?’” He asked himself after that call: “What am I going to do?”

Thanks to a high school counselor, Ortega applied for numerous scholarships, eventually earning a full ride to Mines, a science and engineering school in Golden. But Ortega, 21 and now a junior, is one of a small number of low-income Coloradans who has found a place at Colorado’s most selective public university.

In 2020, Mines ranked 46th from the bottom among all public and private universities in the share of students on campus receiving Pell Grants, the federal aid awarded to students from low-income families, according to an analysis of U.S. Department of Education data by Education Reform Now. That was just 13.8% of the student body.

The school seems not to be progressing. In 2020, the most recent data available, just 13.4% of its 2020 freshman class had Pell Grants — slightly lower than the school as a whole, and the sixth lowest Pell enrollment rate in the country among public colleges, according to Education Reform Now. In comparison, Pell students represented 27% of the 2020 freshman class at all Colorado four-year universities.

To qualify for Pell funds, students must demonstrate financial need. Among Pell recipients, federal data shows about 93% come from families who make $60,000 or less a year. The share of students receiving Pell Grants at a university has become a proxy for how many low-income students an institution is serving. Pell share matters because it shows the degree to which that institution is helping students from all walks of life to find opportunity.

Its school leaders want Mines to become more representative of the state’s economic and demographic makeup. Many of their efforts to get there — like pushing K-12 schools to offer more advanced math and science classes, starting a federal program to help students get to Mines, and encouraging low-income students to come together as a community — are still nascent. Administrators said there were talks for years about what needed to happen, but they were slow to act.

A list of goals the university hopes to reach in 2024 and beyond includes becoming “accessible and attractive to qualified students from all backgrounds.” The Pell share illustrates just how far the school is from that goal, and administrators acknowledge there’s work to be done to connect low-income students to an education that offers one of the highest returns on investment in the country.

President Paul Johnson, who has led the school since 2015, has sent a message to administrators to “double down on figuring this out,” said Sheena Martinez, assistant vice president of student life for equity and engagement. Martinez’s position is new and meant to strategize how to help students of color and those who are low-income. She said the school is building the foundation that will help students for years to come.

“We’re working on being elite, but not elitist,” Martinez said. “And if you talk to students from underrepresented backgrounds, they historically have not seen Mines as a place that is available to them.”

Ortega got interested in science, technology, engineering, and math (STEM) by middle school. Odyssey Early College and Career Options High School in Colorado Springs prepared him well, he says. By the time he graduated, he had earned an associate degree.

His experience isn’t one that every high school student gets, he said.

“The issue is that if you don’t take any college classes during high school, you’re behind,” Ortega said.

Mines leaders know this is a problem. Mines requires students to have a background in advanced classes such as trigonometry, pre-calculus, and chemistry.

Many Colorado students never take those classes, and Mines administrators more and more are reaching out to high schools to encourage them to include classes that are rigorous and lead to college credit in math or science, said Lori Kester, associate provost of enrollment management.

“We’re trying to get in front of high school counselors and make sure that they get students on the right track early on so that students can be admitted to Mines,” Kester said. “That is really critical to our success.”

Mines leaders have created some opportunities to prepare low-income students and get them interested in the university. But they’re limited.

Programs such as The Challenge Program prepare incoming students through math and science classes and seminars on time and stress management. The school offers tutoring programs at DSST: College View Middle School in southwest Denver, where nearly all students come from low-income families of color, and sends Mines students to volunteer at schools throughout the state.

The school also has a summer program that allows juniors and seniors who are students of color, first-generation, or low-income to live and learn on campus.

Newer efforts include an Upward Bound Math Science Program at Lakewood’s Alameda International Jr./Sr. High School. The program is federally funded and one that many colleges across the country have participated in to help underserved students for decades.

Even when schools push students toward STEM, it’s difficult to get them to persist in that field, said Analise Gonzalez-Fine, the DSST charter network’s director of college initiatives. The school focuses on building STEM skills, but many students might never end up at a school such as Mines, she said.

When it came time to apply for schools, there wasn’t a backup option for Ortega — he only applied to the Colorado School of Mines. He knew he wanted to become an environmental engineer with a focus on water resources.

He participated in Mines programs such as Challenge. The finances, however, just didn’t work. He considered joining the National Guard or taking a year off from school to work and save.

“I felt like that was my only way to pay for college,” Ortega said.

The cost of attending Mines is hands down the biggest deciding factor for students who want to attend the university, Ortega said.

Jill Robertson, financial aid director, said the school has merit-based grant programs for Colorado residents. The school also has increased efforts to find donors who will provide scholarships and support for those students.

The school also has partnered with the state’s community colleges where students can earn credit toward a Mines degree but not have to pay Mines tuition.

Robertson said the school has tried to limit annual tuition increases to the rate of inflation. The state, however, has spent less on higher education over the last three decades, and as a result all schools across the state have increased their tuition.

Ten years ago the university charged about one-quarter less per semester for in-state students. The increases have further priced out the state’s low-income students, especially when Pell Grants only pay up to about $6,900 a year, far less than the yearly cost of attendance.

“We really try to keep the cost within a manageable range,” Robertson said. “But it is expensive to educate a really good engineer.”

Most students at Mines make it to graduation within six years — about 83%, according to federal data. But fewer low-income Mines students, about 75%, graduate during that time frame. Mines isn’t alone. Pell students graduate at lower rates at colleges across the state.

Ortega said he saw friends with similar backgrounds drop out at a higher rate than did wealthier friends. Many couldn’t balance jobs and the heavy workload, he said. The students of color who are left include many international students.

“One of my friends, his dad owns an oil company,” Ortega said. “So it’s hard to make a connection when it comes to that part of his life.”

The school has begun to bring freshmen from similar backgrounds together so they can build a community that understands their struggles, Martinez said. The hope is that students have a peer group that can help them along the way.

Ortega said he’s seen the school also place more focus on its Multicultural Engineering Program, which began in 1989. Since he started at Mines, he’s seen more events and more administrators showing up to talk about financial, tutoring, or counseling services, he said.

Ortega also tries to do his part. He works in the financial aid office several times a week. His goal is to let prospective students from backgrounds like his know they have a place at Mines.

He doesn’t want any moms to worry or cry about the cost of college — because there are options. He also tries to tell families that Mines will help students get jobs that will make them money and help change the world.

“It’s something I wish my mom could have gone through,” Ortega said, “just someone saying ‘hey, it’s going to be OK.’” 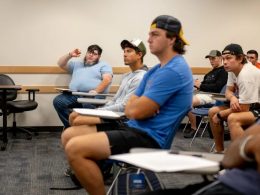 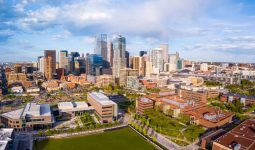 The state of Pell student enrollment